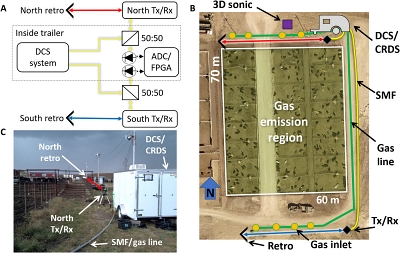 Optical frequency combs could provide a high-tech solution for measuring the gaseous emissions of livestock “in the field”, potentially supporting precision agriculture and helping to reduce greenhouse gas production.

Researchers from the National Institute of Standards and Technology (NIST) and Kansas State University (KSU) have used a dual-comb spectroscopy (DCS) technique to monitor emissions both upwind and downwind from pens with nearly 300 cattle.

The portable system - set up inside a trailer parked next to the feedlot - was able to track concentrations of methane, ammonia, carbon dioxide, and water vapor. It is believed to be the first demonstration of optical frequency combs in an agricultural setting, with the team dubbing the instrument an “agricomb”.

“The measurements captured emissions from both the cattle’s digestive processes and manure on the ground,” reported NIST. “The agricomb measured both methane and ammonia concentrations at parts-per-million levels, with a precision of 25 parts per billion.”

Those measurements were compared with a commercial but less versatile cavity ring-down spectroscopy instrument, with good agreement found.

SESAM source
Reporting their findings in the journal Science Advances, the team says that the agricomb approach should be applicable to methane and ammonia monitoring across much larger areas of pasture - thus improving efforts to accurately quantify the contribution that livestock and other agricultural process make to overall greenhouse gas emissions.

“The laser light was specially amplified and filtered to target specific gases,” explained NIST, noting that the results for methane were comparable to those from a commercial sensor sampling air at multiple inlets along the edges of the feedlot.

“The comb system was particularly useful for ammonia because this gas is sticky and difficult to measure with systems that draw air into them,” added the team. “In addition, the agricomb can measure many gases simultaneously, which is challenging for conventional systems.”

And although the commercial sensors were able to measure precise background levels more quickly, the agricomb captured downwind plumes with greater precision and could better characterize sources of gas, they report.

“The increased precision will be critical for planned future measurements of methane from sparsely distributed cows in a pasture, which is a much more challenging problem,” they pointed out.

Out to pasture
Other advantages of the agricomb include sensitivity to a broad range of infrared frequencies, high precision, calibration-free detection of multiple gases simultaneously, and a more flexible setup. This is partly because two combs with different frequency spacings can be tailored to absorption wavelengths of specific gases.

“Estimating methane emissions from livestock is challenging because of variations in management practices and cattle characteristics in commercial farms,” the team writes. “In addition, what the cattle eat affects emissions but is unaccounted for in national inventories, leading to large uncertainties in greenhouse gas emission models.”

The cattle at the Kansas feedlot where the agricomb experiments took place ate a mix of hay and corn silage. “For the future our plan is to work with KSU to do a pasture measurement, where the cattle eat native grasses,” said NIST’s Brian Washburn.

“The different feed, plus microbial activity in grassland soils that consumes methane, may mean less atmospheric methane production in the pasture than in the feedlot.”

Typically cattle spend about three-quarters of their time in pasture, so Washburn believes that this measurement would be more representative of their net methane production. But it is a much more difficult measurement to make with conventional sensors, since there would typically be only 40 cattle spread over an area of around 25 hectares.