US trio to develop photonic processor for autonomous vehicles 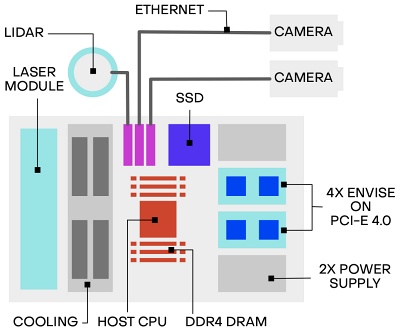 Boston-based startup Lightmatter, which is working to develop photonic processors and interconnects, is now taking part in a $4.8 million project to develop the technology for use in autonomous vehicles.

In a collaboration also involving researchers at Boston University and Harvard, the Massachusetts Institute of Technology (MIT) spin-out is being funded by the US Intelligence Advanced Research Projects Activity (IARPA) as part of its broader “microelectronics for artificial intelligence” theme.

The aim is to develop what Lightmatter calls an “electro-photonic computing” (EPiC) solution for autonomous vehicles, which it is hoped will solve the problem of delivering high-performance, low-latency computing power that is also energy efficient.

Lightmatter says that although the global market for self-driving vehicles is expected to become an $11 billion industry by 2028, there remains a major technological barrier - the availability of an on-board compute system that does not restrict vehicle range and battery life.

“Advancements in EPiC solutions are crucial for overcoming this challenge,” states the firm, pointing to the intensive energy consumption associated with the lidar and radar sensors needed for full autonomy.

Power consumption challenge
Although dozens of well-funded companies are now in advanced development of different lidar sensors for autonomous vehicles, the sheer number of calculations required for safe operation means that a powerful - and therefore battery-draining - computer is required to process all the information generated.

“Sensors may include radar, lidar, cameras, and other driver assistance devices,” explains Lightmatter. “Low-power consumption is a crucial challenge that the autonomous vehicle market faces to deliver competitive vehicle range and performance.”

To achieve so-called “Level 4” autonomy, where no human control is needed, either the number of sensors or their resolution will have to increase.

However, Lightmatter contends that deploying more sensor units in such vehicles is not an option, as it would increase the power consumption of conventional on-board computers to an unsustainable degree.

The company says that conventional transistor scaling will not be able to keep pace with those requirements, with the advanced algorithms required for deep-learning applications in autonomous vehicles instead demanding a completely new approach to computer design - one based on photons, rather than electrons.

Lightmatter believes that its hybrid electro-photonic approach would be able to provide the necessary number of operations per second, while consuming much less energy than a conventional processor.

"In the proposed EPiC system, photonics is used to perform large matrix computations, while electronics is used for performing nonlinear operations and storage.”

For an autonomous vehicle, the EPiC system could be fully integrated with the sensors, adds the firm, and together perform perception, mapping, and planning operations while overcoming the power and performance limitations of electronics-only computers.