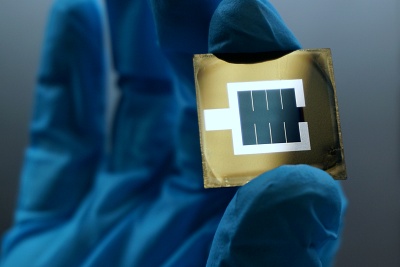 The novel cell architectures take advantage of naturally abundant and cheap perovskite materials that promise to elevate the efficiency of commercial silicon cells beyond 30 per cent. Silicon cells used in today’s solar panels typically operate with an efficiency of between 15 and 20 per cent.

Exclusive arrangement
At the moment, that elevated performance has only been demonstrated on small research-level cells, with additional concerns about the long-term durability of perovskites and the fact that some of the most useful formulations contain lead.

However, a series of partnerships with leading perovskite cell developers just agreed by Meyer Burger will aim to address those issues, and to industrialize the technology.

The consortium will see the Swiss firm work with experts at the nearby Centre Suisse d'Électronique et de Microtechnique (CSEM), as well as Helmholtz-Zentrum Berlin (HZB), Fraunhofer Institute for Solar Energy Systems (ISE), and the University of Stuttgart.

“The development of these new production technologies is to be used exclusively for Meyer Burger’s own manufacturing,” said the company. “The aim is to achieve a significant further increase in the energy yield of commercial solar modules.”

Meyer Burger had previously been working closely with UK-based Oxford PV on tandem perovskite-silicon cells, although that relationship reportedly ended in 2021.

Record breakers
The research partners signed up by Meyer Burger comprise some of the world’s leading developers of perovskite solar technology. Within the past week, researchers at HZB said that they had produced a small-scale tandem cell with a record-breaking conversion efficiency of 32.5 per cent (see image above).

HZB's scientific director, Bernd Rech, said: “At 32.5 per cent, the solar cell efficiency of the HZB tandems is now in ranges previously only achieved by expensive III/V semiconductors. The [latest] NREL graph clearly shows how spectacular the last two increases from EPFL and HZB really are.”

Previously, CSEM and Meyer Burger said that they had achieved an efficiency of 29.6 per cent for a 25-square-centimeter perovskite tandem cell based on a silicon heterojunction structure.

At Fraunhofer ISE, a team has reached 22.5 per cent with a larger, 100-square-centimeter cell, getting closer to the required industrial size. ISE researchers are said to be working on a hybrid deposition process based on two established manufacturing processes to produce perovskite solar cells on double-sided textured silicon solar cells