Two methods, developed by EPFL & CSEM, both result in small-scale (10mm) research cells at around 31% conversion. 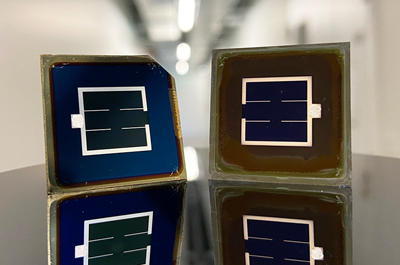 For the first time, an efficiency of 30% for perovskite-on-silicon-tandem solar cells has been exceeded thanks to a joint effort led by scientists at EPFL’s Photovoltaics and Thin Film Electronics Laboratory in partnership with the renowned innovation center, CSEM; both parties are based in Switzerland.

Independently certified by the National Renewable Energy Laboratory (NREL) in the United States, these results are a boost to high-efficiency photovoltaics and, say the developers, “pave the way toward even more competitive solar electricity generation.”

Increasing the power conversion efficiency of solar cells is important for two reasons. In the long run, it is the most effective way to reduce the levelized cost of electricity. In the short term, it is the best way to promote photovoltaics for applications where space is limited, such as on roofs, facades, vehicles, or even drones.

However, all solar cells are fundamentally limited by the materials they are made from, which in turn affects the efficiencies they can achieve. The most adopted solar cell technologies to date are made with silicon. But despite silicon’s success, it has a theoretical efficiency limit of around 29%. Current efficiencies for this technology stand slightly below 27%, leaving a very small margin for future efficiency gains.

In the innovative race to exceed this limitation, scientists have added one (or more) complementary solar cell(s) to silicon to form “tandem” solar cells. The higher-energy visible light of the sun is absorbed in the top cell, while the lower-energy infrared light is absorbed in the silicon cell placed at the rear of the tandem.

Halide perovskites have been identified as an ideal partner for silicon, as they can convert visible light more efficiently to electrical power in comparison to silicon alone, without overly increasing fabrication costs. 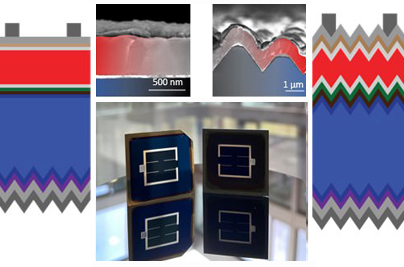 Schematics of different types of perovskite-on-silicon tandems (click for info).

“We have passed a psychological barrier,” says Christophe Ballif, Head of the EPFL Photovoltaics Laboratory and CSEM’s Sustainable Energy Center. “We have validated experimentally the high-efficiency potential of perovskite-on-silicon tandems. The 30% efficiency mark had already been achieved with other types of materials, namely III-V semiconductors.”

Ballif added, “However, these materials and the processes used to make them are too expensive to sustain the energy transition – these devices are a thousand times more expensive than silicon solar cells. Our results are the first to show that the 30% barrier can be overcome using low-cost materials and processes, which should open new perspectives for the future of PV.”

The researchers from Neuchâtel have succeeded in improving the efficiency of two kinds of perovskite-on-silicon tandems. Firstly, they adapted materials and fabrication techniques to deposit high-quality perovskite layers from solution on a planarized silicon surface, reaching a power conversion efficiency of 30.93% for a 1 cm2 solar cell. Secondly, by working on a new version of a hybrid vapor/solution processing technique compatible with textured silicon surfaces, they have produced a solar cell with a power conversion efficiency of 31.25% (again on 1 cm2).

These results constitute two new world records: one for the planar and one for the textured device architecture. The latter approach provides a higher current and is compatible with the structure of current industrial silicon solar cells. The previous efficiency conversion record for perovskite-on-silicon tandem solar cells was set in 2021 by a team at the Helmholtz Zentrum Berlin, who achieved 29.8%. EPFL’s and CSEM’s new records were independently certified by NREL.

“These high-efficiency results will now require further R&D to allow their scaling up onto larger surface areas and to ensure that these new cells can maintain a stable power output on our rooftops and elsewhere over a standard lifetime,” said Quentin Jeangros of CSEM.

Christian Wolff of EPFL concluded, “Tandem perovskite-on-silicon technologies have been said to have the potential to exceed the 30% efficiency benchmark, but this is the first time this long-predicted potential has been demonstrated, which should hopefully pave the way for even cheaper sustainable electricity in the future.”