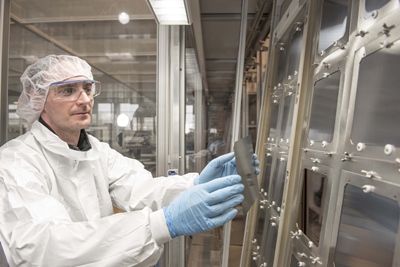 Oxford PV says it is on track to begin producing high-efficiency perovskite-on-silicon tandem solar cells by the end of next year, after key collaborator Meyer Burger and others topped up the UK firm’s latest funding round.

Spun out from Henry Snaith’s world-leading research group at the University of Oxford, Oxford PV’s technology promises to cut the cost of solar power, by making regular silicon solar cells far more efficient than today's typical level of around 22 per cent.

Crucially, the additional processing needed to add a perovskite-based junction to the regular silicon cell is relatively straightforward - meaning that “normal” silicon panels can already be converted into high-performance devices with a conversion efficiency of 28 per cent, but without the level of additional cost that would normally imply.

The additional support from the Swiss semiconductor equipment and services provider Meyer Burger and other investors brings its series D funding to £65 million.

Prior to the series D round, the company had raised £44 million, with backers including the venture wings of Norwegian energy firm Statoil and financial services giant Legal & General.

200 MW capacity line
Under the terms of its backing, Meyer Burger is to install a 200 MW capacity production line for making silicon heterojunction solar cells, enhanced with production equipment for the perovskite top cell, at Oxford PV’s site in Brandenburg an der Havel, Germany.

Its CEO Frank Averdung added: “The success of our funding round and the quality of the new investors we have attracted, validates the commercial readiness of our technology. We now have the funds to move into manufacturing and accelerate market introduction.

“The production line we are installing in Germany, to manufacture perovskite-on-silicon tandem solar cells, will be the first of its kind anywhere in the world. This is a significant moment for Oxford PV and our perovskite photovoltaic technology.”

Because perovskite photovoltaic cells are based on readily available, Earth-abundant materials, and are relatively straightforward to deposit as thin films, solar panels featuring the new technology will generate significantly more renewable power than an equivalent-sized silicon device, but at little additional cost.

However, the technology remains unproved in the field as yet, with no commercial products available. And although earlier questions marks over long-term performance, durability, and the incorporation of lead in the perovskite films appear to have been overcome, the viability of perovskite tandem cells will only be fully proved after they are manufactured, sold, and deployed in large volumes.

According to its most recent shareholder presentation, Meyer Burger's technology roadmap sees the addition of perovskite raising the efficiency of tandem silicon cells beyond 30 per cent in the longer term.

"HJT [heterojunction technology] cells provide best cell technology for upgrade to perovskite-based tandem solar cells because of complementary process sequence and highest efficiencies," added the Swiss firm, whose investment includes an option to acquire up to a 31.6 per cent capital stake in Oxford PV.