UC San Diego wearable device could be used for both clinical practice and research. 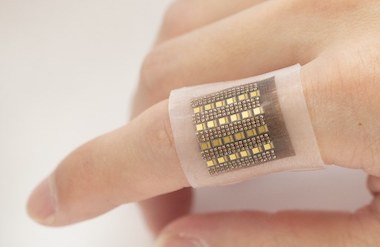 The ability to non-invasively image blood flow and blood vessels is key to a number of clinically valuable biophotonics techniques.

A 2022 survey by SPIE noted that the impact of imaging hemoglobin molecules in particular could be substantial, with the technology likely to contribute to "the decentralization of healthcare [and] the deployment of wearable technologies for self-monitoring."

Engineers at the University of California, San Diego (UCSD) have now made a new contribution to this topic, by developing a wearable electronic patch able to monitor biomolecules including hemoglobin in deep tissues. The results were published in Nature Communications.

"The amount and location of hemoglobin in the body provide critical information about blood perfusion or accumulation in specific locations," said Sheng Xu of UCSD. "Our device shows great potential in close monitoring of high-risk groups, enabling timely interventions at urgent moments."

The patch is based on photoacoustic (PA) sensing, a technique exposing hemoglobin molecules to fast laser pulses and imaging the transient ultrasound pulses that are created. PA as a hemoglobin-mapping technology and an alternative to MRI or X-ray CT has been the subject of clinical research for more than a decade.

UCSD combined PA technology with the concept of a flexible wearable patch, analogous to other currently available devices which employ electrochemical or optical sensing modalities. In particular, the team's goal was to allow sensing of molecules in deep tissues, which have a stronger correlation with metabolic processes than those near the surface typically detected by existing patches.

The device integrates an array of 24 high-power 850-nanometer VCSEL sources distributed in four equally spaced columns and connected in series, with 240 piezoelectric transducer detectors located between the VCSEL columns.

"An array of VCSEL diodes and piezoelectric transducers interconnected by serpentine metal electrodes are encapsulated in an elastomeric matrix," said the project in its published paper. "The high-power VCSEL diodes can generate laser pulses that penetrate more than 2 centimeters into biological tissues and activate hemoglobin molecules to generate acoustic waves."

In trials the patch was applied to tissue phantoms and ex vivo porcine tissue in which blood flow was externally pumped, before being tested in vivo on volunteer subjects, where the depth penetration was measured at 1.1 centimeters. Three-dimensional mapping of hemoglobin with a submillimeter spatial resolution was achieved in these deep tissues, according to the UCSD team.

Future work will include the use of higher power VCSELs, since detection depth is limited by the optical intensity of the illumination. The project noted that PA imaging of the human heart remains "a grand challenge in the field," due to the distance between the organ and the outer skin of the body, but higher power sources could boost the detection depth to the regions of visceral organs.