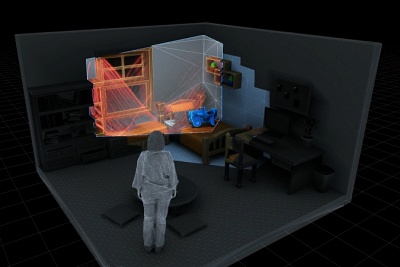 Two startup companies in Europe have agreed a strategic collaboration to commercialize an ultra-compact laser scanning system for 3D perception and augmented and virtual (AR/VR) applications.

Brussels-based VoxelSensors will hook up with German firm OQmented on what is described as a fast and highly efficient system capable of operating in low-light conditions and at a repetition rate of up to 100 MHz.

They will demonstrate the technology at the Consumer Electronics Show (CES) 2023 event, which takes place in early January.

“The collaboration focuses on the system integration and commercialization of a high-performance 3D perception system for AR/VR/MR and XR devices.”

Known as “Switching Pixels”, the VoxelSensors approach is said to resolve some of the major challenges in 3D perception for AR/VR applications.

“The solution is based on laser beam scanning technology to deliver accurate and reliable 3D sensing without compromising on power consumption, data latency or size,” state the firms.

Said to ensure optimal operation under any lighting conditions, the technology uses single-photon sensors to provide asynchronous tracking of an active light source or pattern.

Instead of acquiring frames, each pixel within the sensor array generates an event upon detecting a light signal, something that allows the high-speed repetition rate.

Unlike raster scanning, which operates line-by-line to generate a complete frame, the Lissajous approach is able to capture complete scenes and fast movements much faster, and with less data processing. The single-chip technology is small enough to fit inside a pair of AR glasses.

OQmented co-founder and CEO Ulrich Hofmann said: “The partnership with VoxelSensors is a great opportunity to unlock the potential of Lissajous laser beam scanning for 3D perception in lightweight AR glasses.”

Johannes Peeters, who heads up VoxelSensors, added: “We wanted to revolutionize the perception industry. For too long, innovation in our space has focused on data processing, while there is so much efficiency to gain when working on the boundaries of photonics and physics.

“Blending the physical and virtual worlds will create astonishing experiences for consumers and productivity gains in the enterprise world.”

SPIE AR/VR/MR invited talk
Earlier this year OQmented opened a new optics-focused research and development facility in Jena, as well as an office in Silicon Valley.

Those developments followed a $9.3 million round of venture funding closed by the firm in November 2021, bringing its total funding to $20 million since the ISIT spin-out.

OQmented is also taking part in the SPIE AR/VR/MR event, which runs alongside Photonics West in San Francisco early next year. CEO Hofmann will give an invited talk on the firm's technology in the "Light Engines" session taking place on the morning of February 1.

"The key component to enable this [LBS light engine] is a biaxial MEMS mirror chip that is hermetically vacuum packaged already on wafer level," states his abstract. "OQmented integrates these MEMS chips into most compact, high-performance light engines for monocular and binocular all-day wearable AR glasses."