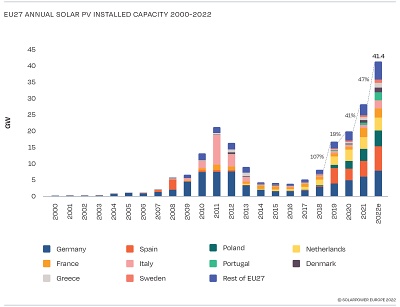 Installation of solar photovoltaic systems in European Union (EU) countries are now expected to exceed 41 GW this year - a new annual record and a rise of nearly 50 per cent on the 2021 figure.

That’s according to the Solar Power Europe organization, whose latest report predicts another sharp increase next year, and indicates that new deployments will exceed 85 GW by 2026.

Walburga Hemetsberger, the CEO of SolarPower Europe, said in a release outlining the latest outlook: “The numbers are clear. Solar is offering Europe a lifeline amid energy and climate crises.

“No other energy source is growing as quickly, or reliably, as solar. We’re building a secure, green, prosperous Europe on a foundation of solar.”

Installations in 2022 have been led by Germany and Spain, deploying 7.9 GW and 7.5 GW respectively. Next came Poland, the Netherlands, and France, at 4.9 GW, 4 GW, and 2.7 GW - with only France posting a decline on its 2021 installations figure.

Discussing the findings in a YouTube video (see below), Hemetsberger and Kadri Simson, the European Commissioner for Energy, said that the 2022 installations could power the equivalent of 12 million homes.

“This is very impressive,” said Simson. “I hope that next year we will have even more impressive numbers to announce.”

Filing the gas gap
With energy prices rising sharply across Europe amid Russia’s initial aggression and subsequent invasion of its neighbor, and in response to the EU’s sanctions, the International Energy Agency (IEA) has recommended that the bloc installs around 60 GW of solar power in 2023 to compensate for shortfalls in Russian gas supplies.

Solar Power Europe’s central prediction for 2023 falls a little short of that target, although there is the potential to exceed expectations again, as happened this year.

“With rapid and targeted support, solar power could fill the gap, reaching up to 67.8 GW of installations in 2023 in a high scenario,” suggests the organization.

The 2022 boom means that EU countries have now installed a cumulative 209 GW of solar PV, after five successive years of significant expansion. The figures represent a recovery from the slump experienced between 2012 and 2016, which had followed an unsustainable boom period in the late 2000s.

If the next few years progress as Solar Power Europe expects, that cumulative total could reach nearly 500 GW by 2026.

“The drivers for solar in Europe are much stronger than before, accelerating growth in the coming years,” it reports. “The energy crisis and the underlying current geopolitical context has led to EU policymakers prioritising the acceleration of renewables’ deployment.

“In the short term, emergency measures are being taken to ease permitting procedures and accelerate the rollout of solar projects.

Commissioner Simson wrote in the report: “This year has taught us of the grave importance of a secure, home-grown energy system, one that cannot be manipulated for geopolitical purposes.

“That system needs to be based on renewables. Solar has a very important role to play as it can be deployed fast, and already make a real difference in the current crisis. The [European] Commission is doing all it can to support the deployment of solar energy.”

The Commission’s new aim - outlined in May 2022 but yet to be finalized - is for renewables to deliver 45 per cent of EU energy requirements by 2030, with solar PV providing a key part of the response.

“With demand for solar energy growing, we should be ready to seize the opportunity on the supply side,” wrote Simson. “We have just launched the EU Solar PV Industry Alliance (ESIA) to seize the tremendous industrial opportunity on offer. The alliance will help us to expand manufacturing capacities for more innovative, more efficient, and more sustainable solar PVs.”

“Europe needs to be able to source solar products sustainably and from reliable supply chains,” states the report in its recommendations. “The EU cannot exchange one dependency for another. A powerful domestic solar industry, at the centre of a diversified, global solar supply chain, is critical.

“Today, Europe does not have a strong manufacturing industry along the supply chain for solar modules and is highly dependent on Chinese imports, especially for ingots and wafers, but also cells.” 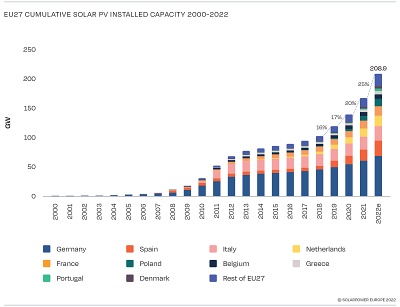 With a proliferation of similarly assertive industrial strategies around the world, in particular India and the US, the report says it will be essential for Europe to move “fast and big”, by allowing support for both up-front investment and operating costs via new rules on state aid.

“In December 2022, the EU launched the ESIA as a funnel for solar manufacturing financing,” notes the Solar Power Europe report. “This alliance will promote investment in large-scale factories, aiming for 30 GW of manufacturing of each key solar component, annually, by 2025.”

That total would represent more than six times the current average capacity of around 4.5 GW.

The report also stresses that the EU will need to accelerate Free Trade Agreement negotiations with its trading partners, with a view to ensure steady and diversified supply of critical raw materials, components and solar modules.