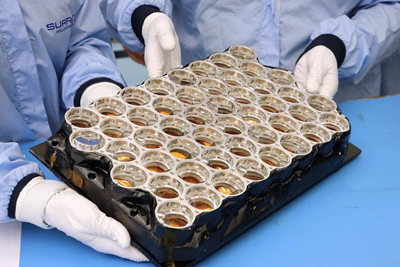 The Lunar Pathfinder mission is led by Surrey Satellite Technology, Guildford, UK, and ESA arranged for the mission to provide communications services to NASA. Teams from NASA, ESA, and SSTL completed inspections when the laser retroreflector array arrived at SSTL’s facility in Guildford, where it will be installed in the satellite.

Laser retroflectors are mirrored devices that reflect light back at its source; engineers can bounce laser signals off the arrays to precisely measure the position of the spacecraft and check the performance of Global Navigation Satellite Systems [click for video explainer] capabilities around the Moon. Validating and developing these capabilities will help NASA navigate as it travels to and explores the Moon with the Artemis missions.

In addition, the retroreflectors will allow NASA to learn more about lunar science and space geodesy, which uses satellite measurements of celestial bodies to understand their structure.

The Artemis missions are bringing humans back to the Moon and will test the technologies needed to one day journey to Mars. NASA is doing this through collaborative agreements with international partners and commercial companies. Delivery of the laser retroreflector array is the first milestone completed in a memorandum of understanding between NASA and ESA that the agencies signed in June, 2022.

NASA’s Goddard Space Flight Center in Greenbelt, Maryland, furnished the Lunar Pathfinder mission with the retroreflector array with oversight from the Space Communications and Navigation Program, located at NASA Headquarters in Washington, DC and with support from the U.S. National Geospacial-Intelligence Agency.

The retroreflector array is designed and manufactured by Kellogg Brown & Root (KBR), a science and engineering solutions company. The Lunar Pathfinder spacecraft is being built by Surrey Satellite Technology Ltd. in partnership with ESA.