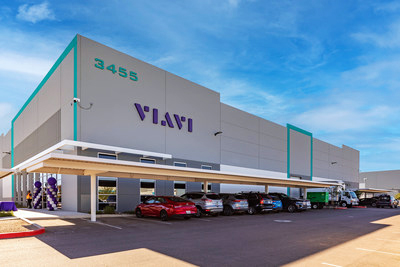 Viavi Solutions has opened its new production facility in Chandler, Arizona. The company has added to U.S manufacturing capacity as it has grown its presence in the state, including the relocation of its global headquarters.

Since preparations to move its global headquarters from California began in 2021, the company has already made significant contributions to the business and technology community.

Viavi President and CEO, Oleg Khaykin, has been elected to Greater Phoenix Leadership; the company has established a scholarship at the University of Arizona’s Wyant College of Optical Sciences, and the company has also contributed to Chandler’s reclaimed water program.

To mark the completion of the new production facility and global headquarters, Viavi held a grand opening in Chandler on November 10. The firm described the plant’s opening as “a boon for the local economy, representing an initial capital infusion of nearly $100 million, with a further $50 million expected to be generated in payroll taxes for local and state governments following the creation of hundreds of new jobs.”

The facility features the company’s most modern and efficient optical coating capabilities. In seeking a new facility to operate its sophisticated equipment, the company said it found that Arizona “provides the ideal conditions for long-term, sustainable growth including a business-friendly environment, a high quality of life at a reasonable cost, and a strong base of talent”.

With the world-renowned Wyant College of Optical Sciences and a rich ecosystem of optics companies, Arizona has long attracted the best and brightest of the optics industry.

“Viavi is a global company in every sense of the word,” commented CEO Oleg Khaykin. “That means setting up in key locations around the world is critical to our success, and we’re always sure to contribute to the communities in which we operate. Establishing a major hub in Chandler, Arizona, will not only expand our involvement in the local optics ecosystem but ramp up our U.S. manufacturing capabilities considerably.”

Chandler Mayor Kevin Hartke added, “Advanced manufacturing is in Chandler’s DNA and we are thrilled to welcome the latest addition with Viavi. It has been a pleasure working with the team as they have built out their new manufacturing facility and relocated their headquarters here.”

Thomas Koch, Dean and Professor, Wyant College of Optical Sciences at The University of Arizona, said, “We’re thrilled to see optics heavyweights like Viavi investing in Optics Valley. We see a bright future together, and look forward to doing our part in talent generation and research innovations to grow the optics ecosystem here in Arizona.”

The company generated $1.3 billion in revenue in fiscal year 2022 and has more than 3,600 employees in 50 locations throughout North, Central and South America, Europe, Africa, the Middle East, and Asia Pacific/Japan/China.