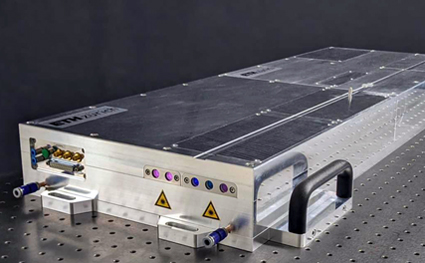 Ultrafast laser technology has enabled numerous methods for precision measurements. These include in particular a broad class of pulsed-laser experiments in which a sample is excited and the response measured. In such studies, the delay between the two pulses should typically cover the range from femtoseconds to nanoseconds.

In practice, scanning the delay time over a range that broad in a repeatable and precise manner is a significant challenge. A team of researchers in the group of Prof. Ursula Keller at the Institute for Quantum Electronics, with contributions from Dr. Justinas Pupeikis, Dr. Benjamin Willenberg and Dr. Christopher Phillips, has now taken a major step towards a solution that has the potential to be a game changer for a wide range of practical applications.

Reporting the achievement in Optica, the team recently introduced and demonstrated a versatile laser design that offers both outstanding specifications and a low-complexity setup that runs stably over many hours.

The conceptually simplest solution to scanning optical delays is based on a laser whose output is split into two pulses. While one of them takes a fixed route to the target, the optical path for the second pulse is varied with linearly displacing mirrors. The longer the path between mirrors, the later the laser pulse arrives at the target and the longer is the delay relative to the first pulse.

The problem, however, is the high speed of light, which covers some 0.3m per nanosecond (in air). For mechanical delay lines this means that scanning to delays up to several nanoseconds requires large devices with intricate and typically slow mechanical constructions.

An elegant way to avoid complex constructions of that kind is to use a pair of ultrashort pulse lasers that emit trains of pulses, each at slightly different repetition rates. If, say, the first pulses emerging from each of the lasers are perfectly synchronized, then the second pair has a delay between the pulses that corresponds to the difference in repetition times of the two lasers.

The next pair of pulses has twice that delay between them, and so on. In this manner, a perfectly linear and fast scan of optical delays without moving parts is possible — at least in theory. The most refined type of a laser system generating two such pulse trains is known as a dual comb, in reference to the spectral structure of the output consisting of a pair of optical frequency combs.

Whereas the promise of the dual-comb approach has long been clear, progress towards applications was hindered by challenges related to designing a readily deployable laser system that provides two simultaneously operating combs of the required quality and with high relative stability. Now, Pupeikis et al. have made a breakthrough towards such a practical laser, and the key is a new way to generate the two frequency combs in one and the same laser cavity. 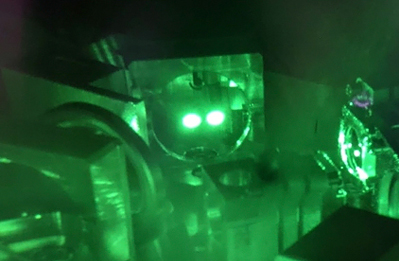 The task the researchers had at hand was to construct a laser source that delivers two coherent optical pulse trains that are basically identical in all properties except from that all-important difference in repetition rate. A natural route to achieve this is to create the two combs in the same laser cavity.

Various approaches for realizing such laser-cavity multiplexing have been introduced in the past. But these typically require that additional components are placed inside the cavity. This introduces losses and different dispersion characteristics for the two combs, among other issues. The ETH physicists have overcome these issues while still ensuring that the two combs share all of the components inside the cavity.

They achieved this by inserting into the cavity a “biprism”, a device with two separate angles on the surface from which light is reflected. The biprism splits the cavity mode into two parts, and the researchers show that by suitable design of the optical cavity the two combs can be spatially separated on the active intracavity components while still taking a very similar path otherwise.

The spatial separation of the modes at these stages means that two combs with distinct spacing can be generated, while most other properties are essentially duplicated. In particular, the two combs have highly correlated timing noise. That is, while imperfections in the temporal comb structure are unavoidably present, they are almost the same for the two combs, making it possible to deal with such noise.

An outstanding feature of the novel single-cavity architecture now introduced is that it does not require compromises in laser design. Instead, cavity architectures that are optimal for single-comb operation can be readily adapted for dual-comb use. With that, the new design also represents a major simplification relative to commercial products and opens up a path for the production and deployment of this new class of ultrafast laser sources.

The benchmarks achieved in the first demonstrations are highly encouraging. The researchers scanned an optical delay of 12.5 ns (equivalent to a distance of 3.75 m in air) with 2-fs precision (which is less than a micrometre in physical distance) at rates of up to 500 Hz and with record-high stability for a single-cavity dual-comb laser.