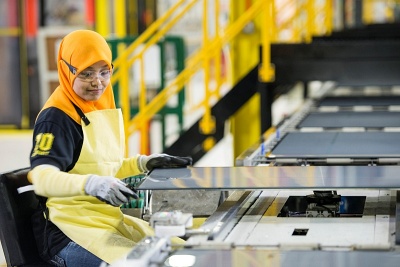 Assuming that it obtains the expected permits and incentives the company, a world leader in thin-film cadmium telluride (CdTe) technology, will spend some $270 milion establishing the new 1.3 million square-foot facility close to its existing manufacturing lines in Perrysburg.

First Solar revealed its plans alongside its latest financial results, with CEO Mark Widmar reporting “robust demand” for its modules, and a bursting order book stretching out as far as 2026.

The firm also has two new US manufacturing sites in the pipeline - one of which is under construction and scheduled to begin operations next year.

New legislation critical
In stark contrast to the wider stock market - and technology stocks in particular - First Solar’s stock valuation has soared in recent weeks, and has now doubled since the start of 2022.

Discussing the firm's latest results with investors, Widmar cited the enactment of the Inflation Reduction Act as a key development in the US, with accompanying tax credits for solar and clean hydrogen production.

He explained that, at the moment, transferring potential module improvements into commercial products requires the company to use specialized product development lines at its manufacturing facilities, adding a certain amount of downtime and operational complexity.

But the new R&D facility will provide a dedicated pilot line allowing production of full-size prototypes of both thin-film and tandem PV modules - without interfering with ongoing operations.

“Creating a sandbox separate from commercial manufacturing operations is expected to reduce operational complexity, reduce costs, allow us to accelerate our rate of learnings, [and] solidify our leadership in current and next-generation technologies,” Widmar said.

Human rights; tandem cells
The CEO added that future demand for its modules and panels could be accelerated by new measures intended to tackle the issue of businesses profiting from human rights abuses, particularly in China's Xingqiang region - a key global center for silicon PV production.

“More recently, the European Union released a draft law that could come into effect by 2025, which would ban the import of products linked to the use of forced labor regardless of where they are made,” Widmar said.

“These actions point to the growing compliance risks of continuing to rely on Chinese crystalline silicon and the increasing urgency with which solar industries and democratic nations need to find sustainable solutions in response to the significant threat.”

Meanwhile, First Solar’s CTO Markus Gloeckler said of the new R&D site: “We expect that this new facility will play a pivotal role in solidifying America’s leadership in the development and responsible production of high-performance, thin-film photovoltaic semiconductors.

“This facility will be designed with the future in mind and we expect that it will directly enable the next generation of advanced photovoltaics.”

One of the key areas that First Solar is working on is the development of multi-junction, also known as tandem, PV cells featuring both CdTe and crystalline silicon elements that Widmar indicated should raise the efficiency of PV modules to as much as 25 per cent.

First Solar’s current “series 6” modules, based only on CdTe, are rated at “up to” 19.2 per cent efficiency, while efficiencies in excess of 22 per cent have previously been achieved with small-scale, research-level cells.

“We [have] made good progress in the lab,” the CEO told investors. “The real question is, ultimately, how do we commercialize, and when do we come to market?”