Fraunhofer IOF, startup NovaPump, and Jena University Hospital’s “pump cage” is cut out of a thin metal tube by laser. 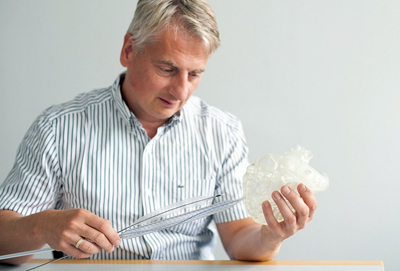 Researchers and entrepreneurs from photonics hotspot Jena, Germany, are winning hearts – literally. Together with the start-up NovaPump and the Jena University Hospital, the Fraunhofer Institute for Applied Optics and Precision Engineering (IOF) has developed innovative heart valves and pumps.

On the occasion of World Heart Day on September 29, the team reviewed the history of their long-standing cooperation: the partners have been involved in the development of efficient implants for weakened hearts for many years, in close scientific collaboration with the Department of Internal Medicine at Jena University Hospital.

Together with the team of clinic director Prof. Dr. Christian Schulze, they have worked closely on various therapeutic solutions – most recently on two public projects funded by the German Federal Ministry of Education and Research to develop innovative right and left heart pumps. Laser fabrication methods are key to the success of these developments.

The pumps are inserted via the leg vessels to the heart in acute patients in the catheter laboratory while the heart is still beating. Temporarily, these self-expanding heart pumps can provide effective pumping support for a few days until further diagnostic and therapeutic measures are taken and the weakened heart muscle has recovered.

Since 1998, Dr. Thomas Peschel has been researching various implants for the heart, in addition to many other things at Fraunhofer IOF. His work in this field began with the development of an artificial heart valve.

The valve includes a vascular support, also known as a stent. Together with a team of researchers from Fraunhofer IOF and physicians from the University Hospital of Jena, Peschel developed a prosthesis that can be placed at the site of the damaged heart valve without major surgery.

What is special about the heart valve developed by Peschel and his team is that the valve does not unfold together with the stent until it is in place. The idea was transferred into medical practice with the help of a spin-off company.

Coincident with Peschel's research, NovaPump was launched in Jena. Co-founder, Prof. Markus Ferrari, was involved in heart valve development for Jena University Hospital. Together with his business partner Ronald Reich, now managing director of NovaPump, in 2013 the two approached Thomas Peschel's team at Fraunhofer IOF and inspired him with the idea of developing novel self-expanding, pulsatile heart pumps. 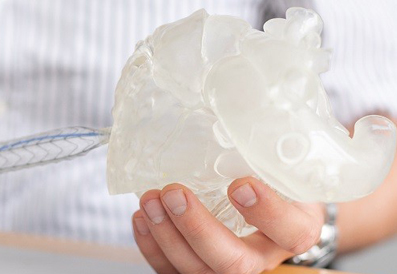 Demonstrating the implantation of the right heart pump.

From valves to pumps

For Peschel, this was an interesting new challenge: Together with NovaPump, he and his team first began working on a pump for the so-called right ventricle, or heart chamber. The right ventricle pumps deoxygenated blood toward the pulmonary circulation, where it is subsequently oxygenated in the lungs and pumped back into the body.

“The right ventricle was very well suited to the idea of a novel self-expanding and catheter-based pulsatile heart pump. The pressure is lower than in the left side of the heart, and there is only one competitor system on the market today that is based on a pumping principle that is disadvantageous for patients,” he said.

The NovaPump right heart pump uses innovative valves inside and a small balloon as a drive. It can be filled with helium in a fraction of a second and then deflated again – a classic positive displacement pump.

In order to work flawlessly, the balloon needs an extremely stable support structure. This unfolds in the superior vena cava in such a way that the balloon is directly ready for use and can be activated via a control console that has proven itself in cardiac medicine for many years.

To realize this extremely difficult undertaking, a special shape memory metal is used for the supporting structure of the heart pump. The pump cage is cut out of a thin metal tube with a laser and then further treated in such a way that it develops its required stability at body temperature and can nevertheless be explanted again via the leg vein in a catheter-based and folded manner after cardiac support has been provided.

After successfully demonstrating the right heart pump in various test series, the team led by Peschel, Schulze, Reich and Ferrari has since developed another pump – this time for the left ventricle. After extensive research, they finally succeeded in finding the ideal design and material match for it to meet the anatomical requirements and pressures in the left ventricle.