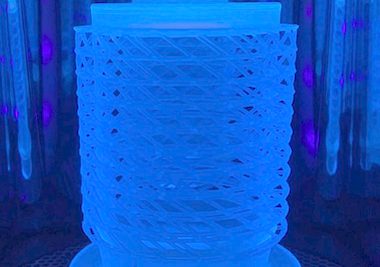 Heart of the matter: scaffold model

Techniques allowing doctors and clinicians to understand the human heart and how it responds to treatment without embarking on major surgery can involve several different approaches, but none of them is ideal.

Cadaver hearts can't last for long periods of time, and mechanical manipulation of lab-grown tissues is not a good simulation of the real human body. A way to develop highly ordered functional structures at a small scale would be a better route, and laser writing techniques have now demonstrated a possible solution.

A project at Boston University has used two-photon direct laser writing (TPDLW) to fabricate a nanoscale-resolution scaffold, with mechanical properties designed to support the formation and cyclic contraction of a stem cell–derived ventricular chamber.

Reported in Science Advances, the breakthrough demonstrates a previously unexplored application of high-precision fabrication, one that could be generalized to expand the accessible spectrum of organ-on-a-chip models.

The Boston University team believes that its miniPUMP - the cardiac miniaturized Precision-enabled Unidirectional Microfluidic Pump - could now pave the way for building lab-based versions of other organs, from lungs to kidneys.

"We can study disease progression in a way that hasn’t been possible before," said Alice White of BU College of Engineering. "We chose to work on heart tissue because of its particularly complicated mechanics, but when you take nanotechnology and marry it with tissue engineering, there is potential for replicating this for multiple organs."

The project employed a commercial photoresist material and a TPDLW 3D-printing platform from Nanoscribe for its research, constructing a scaffold structure by patterning a predetermined unit cell along a cylindrical face. The printing process for a full 3-centimeter-square scaffold took 1.5 hours.

Customized components acting as small tubes and miniature acrylic valves, opening and closing to control the flow of water, were then manufactured in a similar operation. Muscle cells made using stem cell technology provided the device's pumping action.

Better predictions of success or failure

"Advances in miniaturization are redefining the boundaries of many fields but have yet to fully manifest in the engineering of tissues, despite the promise of such miniaturization for organ-on-chip applications," commented the project in its published paper. "Here, the use of microscale precision-designed structures to guide tissue formation and mechanical functionality showcases an approach to architecture and mechanics enabling the replication of mechanically complex physiological behaviors in an unprecedentedly small scale."

In trials, the complete TPDLW-enabled miniPUMP system successfully delivered the main principles of the ventricular volumetric function, and exhibited the key features of a complete pressure-volume loop like the one associated with a cardiac cycle.

The device could ultimately help to speed up the development process for heart treatment drugs, with researchers using the miniPUMP at the outset to better predict success or failure.

"We don’t think previous methods of studying heart tissue capture the way the muscle would respond in your body," said BU's Christopher Chen. "This gives us the first opportunity to build something that mechanically is more similar to what we think the heart is actually experiencing. It's a big step forward."