Ultracompact design could be well suited to consumer electronics and space devices. 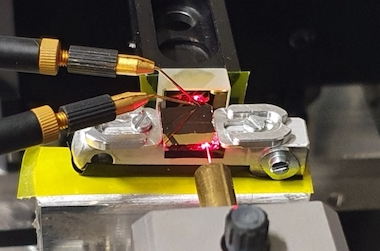 Integration of infrared sensing capability into consumer electronics and wearable devices will require the spectrometer instruments themselves to be suitably compact.

To date this miniaturization has involved compromises between the bandwidth and the resolution of the device, while Fourier-transform spectrometers, known to have a desirable combination of both parameters, have been difficult to fully miniaturize at all.

A project involving Swiss research center Empa and ETH Zurich has now demonstrated a possible solution, developing a miniaturisation process for IR spectrometers based on quantum dot (QD) photodetectors. The work was published in Nature Photonics.

QDs, nanoscale semiconductor materials with tightly confined charge carriers, are already of interest as photodetectors for certain wavelengths, with the predicted growth of shortwave infrared (SWIR) technology into new mass-market consumer applications likely to make use of the technology.

The Empa project set out to develop a proof-of-concept miniaturized Fourier-transform waveguide spectrometer incorporating a CMOS-compatible colloidal QD photodetector as a light sensor, suitable for integration into both consumer electronics and more specialized space devices.

"Although the interferometric platform of Fourier-transform spectrometers has been downscaled, they still rely on an external imaging sensor for signal detection," commented the project in its paper. "This means that currently, the overall waveguide spectrometer cannot be smaller than commercially available detectors."

The project's light sensor was based on colloidal mercury telluride (HgTe) quantum dots, chosen for their ability to cover the visible and infrared light region approaching the terahertz region by varying the QD size.

In trials, the spectrometer exhibited "a large spectral bandwidth and moderate spectral resolution of 50 cm−1 at a total active spectrometer volume below 100 × 100 × 100 microns," according to the project. The optical sensor was monolithically integrated on top of a waveguide, said to be the first such integration for HgTe QDs.

The breakthrough could now lead to ultracompact spectrometers providing enhanced sensitivity and specificity in the near-IR region, to match the performance currently associated with mid-IR devices.

Another application area may be for small femtosatellites, space devices below 100 grams in mass, currently proposed as routes to orbital imaging. The project foresees snapshot hyperspectral cameras where each pixel of a camera consists of an individual ultracompact spectrometer, leading to a small pixel pitch for the overall imaging platform.

"The monolithic integration of subwavelength IR photodetectors has a tremendous effect on the scaling of Fourier-transform waveguide spectrometers", said Empa researcher Ivan Shorubalko. "But this may also be of great interest for miniaturized Raman spectrometers, biosensors and lab-on-a-chip devices as well as the development of high-resolution snapshot hyperspectral cameras."