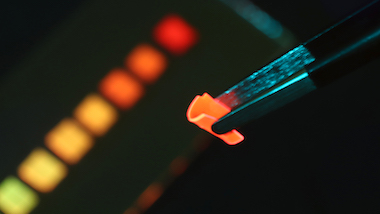 Luminescent solar concentrators (LSCs), in which solar light activates luminescent materials and the re-emitted light is directed onto photovolataic (PV) materials, are known to be potential route to solar power generation in some scenarios.

Recent advances in flexible polymers and stretchable PV structures have allowed the same principles to be applied to textile-based LSCs, opening up the possibility of pliable materials able to generate usable amounts of power.

A project at Swiss research lab EMPA and ETH Zurich has now demonstrated a novel material able to function as a LSC while maintaining the flexibility and air permeability of a wearable fabric. The work was published in Nano Energy.

The breakthrough is based on amphiphilic polymer co-networks (APCN), hydrogels consisting of crosslinked hydrophobic and hydrophilic components, that are already used in commercial silicone-hydrogel contact lens thanks to their bio-compatible nature.

"The reason we chose exactly this polymer is the fact that it is capable of incorporating two immiscible luminescent materials at the nano scale and letting them interact with each other," commented Luciano Boesel from EMPA's Laboratory for Biomimetic Membranes and Textiles.

The structure allows APCNs to be loaded with different hydrophilic and hydrophobic luminescent materials, according to the team's published paper. The small distances between adjacent nanometer-separated domains of the hydrogel give rise to an extremely large and continuous interface between the two polymer components.

Solar concentrators worn on the body

Minimizing the distances between the elements in this way means that the luminescent species autonomously form energy transfer pairs, expanding the absorption range of an acceptor to the solar spectrum and increasing the optical efficiency of the overall operation under solar radiation.

For textile applications, the project developed a structure in which wearable LSCs are positioned on top of wearable PVs, in order to make the resulting overall structure wearable as well.

The design included fluorescein as a fluorophore attached to the hydrophilic phase of its APCN, and Lumogen Red dye loaded into the hydrophobic phase during the material's synthesis, the luminescent materials then being positioned in the adjacent domains of the hydrogel.

"APCNs can be applied as thin films, with a thickness of several hundred micrometers, on flexible substrates or textiles," said the team. "Therefore, the travel distances of re-emitted photons in the tandem LSCs/PVs application is no longer than the film thickness."

In EMPA's trials, for a film thickness of 200 microns the loss in emission-normalized intensity for re-emitted photons did not exceed 10 percent.

This could allow the APCN material to be applied as a coating on top of proposed solar cell textiles, whose structures do not typically involve coverage of the entire surface area with active PV material.

"These novel solar concentrators can be applied to textile fibers without the textile becoming brittle and susceptible to cracking or accumulating water vapor in the form of sweat," noted EMPA. "Solar concentrators worn on the body offer an immense benefit for the ever-increasing demand for energy, especially for portable devices."