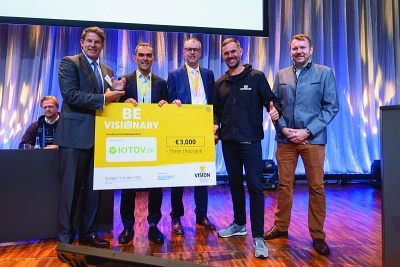 AI for the prize

Kitov.ai, an Israeli startup that has developed a way to optimize automated inspection using machine vision, has won the 2022 VISION Award.

The company, which released its “CAD2SCAN” software product earlier this year, was selected as the best of five finalists at the Stuttgart trade fair, after no fewer than 61 companies entered the competition.

The VISION Show judging panel commented that the software solution would help to solve a significant issue holding up the wider adoption of machine vision in manufacturing - namely the need to adapt vision systems to specific inspection applications, typically meaning costly expert intervention.

Founded in 2015, Kitov now employs 30 people. In 2018 it attracted investment from venture group RSBG that also saw the company become part of the wider Hahn Group, which specializes in industrial automation.

Despite the proliferation of machine vision across industry, inspection of such complex parts is still mostly carried out manually. And in cases where machine vision is deployed, systems typically require a degree of customization that makes the approach very costly.

“By combining CAD2SCAN with Kitov’s automated planning and inspection software platform, customers can automate inspection solutions that are too difficult and time-consuming to manually program and deploy,” says the firm, which landed €10 million in venture support from RSBG.

The software is able to extract both geometric and semantic information for each inspection requirement marked on the CAD file, with an open software platform allowing easy integration of third-party detectors.

“Automatic CAD-based inspection planning is a game-changer for industries that manufacture complex parts and products,” claimed Kitov when launching the software earlier this year, highlighting 3D-printed parts and medical implants as other examples of complex shapes that would suit the approach. 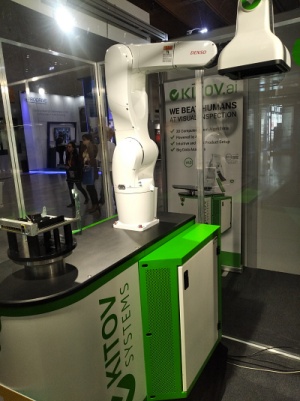 Rubner explained that by allowing quality managers to define their inspection requirements directly on the CAD model, the approach could save weeks or even months of work compared with defining by manual inspection.

“Our software automatically takes all available information from the CAD, including geometric and component specifications, and uses it for the planning of the robot inspection,” he added.

“It fulfils the requirements, guarantees full coverage, reduces the number of images needed, minimizes the total inspection time, and calculates the best viewing and illumination angles for each specific feature of interest.”

Kitov.ai was up against four other finalists in the competition. They included Brighter AI Technologies with a method for irreversibly anonymizing personal information such as faces and license plates in image and video data; a highly flexible MEMS-based industrial camera from Saccade Vision; extended short-wave infrared (eSWIR) cameras from SWIR Vision Systems employing colloidal quantum dots (CQDs); and a ground-breaking algorithm for real-time object tracking developed by Edge Impulse.