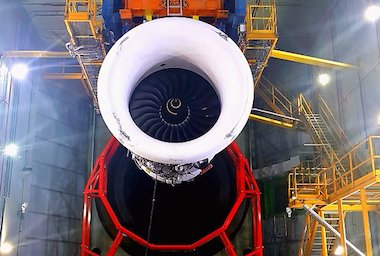 A near-IR imaging platform has captured images of carbon dioxide in the exhaust plume of a commercial jet engine, said to be the first implementation of such a technique for this purpose.

Developed at the University of Strathclyde, the chemical species tomography (CST) technique could help accelerate research aimed at developing engines and aviation fuels that are more environmentally friendly.

As described in Applied Optics, CST is analogous to X-ray-based CT scans, but uses near-infrared laser light tuned to the absorption wavelength of a target molecule. This in turn requires very fast imaging speeds to capture the dynamic processes of combustion.

Implementations of CST based on tunable diode laser spectroscopy (TDLS) have already been employed to monitor combustion processes in industrial processes, but until now the method has not been used to measure the cross-sectional distribution of carbon dioxide emerging from commercial aero-engines.

"This information has not been available before at this industrial scale and is a big improvement over the current industry-standard emissions measurement, which involves taking gas from the exhaust to a gas analyzer system in a different location," commented team leader Michael Lengden from the University of Strathclyde.

The project's imaging method involves passing a total of 126 near-infrared optical beams through the engine exhaust, with the beams oriented in six distinct angular projections of 21 parallel beams each, exploiting carbon dioxide's absorption at around 1999 nanometers. The sources were mounted on a 7-meter-diameter frame, so that the illumination traverses a 7-meter path in a coplanar geometry, and the frame was positioned 3 meters downstream of the engine's nozzle.

A need for turbine and fuel technologies to improve radically

"The very refined measurement methodology we used demanded an exquisite knowledge of carbon dioxide spectroscopy and the electronics systems that provide very precise data," said Lengden. "Also, a very sophisticated mathematical method had to be developed to compute each chemical species image from the measured absorptions of the 126 different beams we used."

The Strathclyde platform was used to assess the exhaust of a Rolls-Royce Trent gas engine turbine, typically used on long-haul aircraft. The project recorded data at frame rates of 1.25 Hz and 0.3125 Hz while the engine was operated over the full range of thrust.

"We believe that these are the first true CST images to be obtained in a turbine exhaust plume, in that the multi-angular array permits spatial resolution of around 60 millimeters," noted the team in its published paper.

The resulting images showed that, at all thrust levels, a ring-structure of high carbon dioxide concentration was present in the central region of the engine. There was also a raised region in the middle of the plume, which was likely due to the engine's shape.

In addition to providing valuable data about carbon dioxide emission, the same technique should be capable of imaging several other species, potentially including water, carbon monoxide and unburnt hydrocarbons, and the project is now working on ways to improve the image frame rate and temporal resolution that its set-up can achieve.

"The aviation industry is a major contributor to global carbon dioxide emissions so there is a need for turbine and fuel technologies to improve radically," said Michael Lengden. "By providing fully validated emissions measurements, our new method could help the industry develop new technology that reduces the environmental impact of aviation."