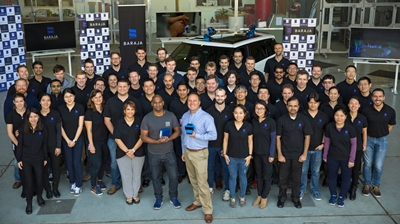 An Australian developer of lidar systems for future autonomous vehicles has emerged from stealth mode, revealing details of designs based around tunable lasers and dispersive optics.

“Spectrum-Scan represents an entirely new category of lidar, pairing a wavelength-tunable laser with prism-like optics,” claims the firm. “This innovation addresses the scalability, reliability and performance issues that have challenged automakers, rideshares and tech behemoths as they race toward a fully-autonomous future.”

Collarte, Baraja’s CEO, added in a release: “Our experience in the optical telecommunications field, in particular the knowledge gained from years of product development for high-reliability use-cases, inspired us to solve some of the biggest problems facing the current state of lidar.

“The unique perspective our team brings to the field has helped us create a novel way to give vision to autonomous vehicles.”

1.5 µm focus
The Baraja team contrasts its approach with the more typical use of rotating “bucket” lidar systems seen on top of early incarnations of self-driving vehicles, as well as the more recent development of MEMS-based mirrors to steer light beams.

“These moving parts have unresolved reliability problems in vehicles due to constant vibration and shock,” says the firm. “Delicate components fail or require costly over-engineering to house and protect.

“These legacy scanning methods inject cost, reliability and performance issues, and contribute to the unwieldy appearance and vehicle integration difficulties of existing lidar solutions. These limitations have become a serious bottleneck to the mass deployment of self-driving cars.”

Collarte told optics.org: “We translated components and technologies that are mature, volume-produced, ultra-reliable and have already been costed down by the optical telecommunications industry – we stand on the shoulders of giants.

“Using a tunable semiconductor laser and dispersive optics is very low complexity if you think about it compared to other solid-state technologies.”

In a company video posted on LinkedIn, Pulikkaseril added: "My light-bulb moment was when I realized that I could change the color of light really quickly. I was really excited by how successfully we were working with this laser technology but the light was trapped in the fiber. And I thought [that] if we can get it out into free space and into some simple optics, we can steer a beam without any moving parts."

While Collarte wouldn’t comment on those rival approaches specifically, he did state: “We do believe that [the] 1.5 µm wavelength is the way forward - provided you don’t take it upon yourself to redesign your own laser/receivers; you have to work with the industry.”

Series A backing
Unlike Luminar and others, Baraja is yet to reveal any details of the auto manufacturers that it is working with - although CTO Pulikkaseril said that the years spent in stealth mode had included “iterating behind closed doors with OEMs and other high-profile pioneers in the autonomous vehicle space”.

Collarte added that although he was unable to name names right now, Baraja’s systems “will be very visible ‘in the wild’ very soon”.

Currently at the series A funding stage, the Sydney startup says it has secured backing from venture firms Sequoia China, Blackbird, Prisma, and Main Sequence Ventures. Now employing 60 people, it has also opened offices in San Francisco and China.

Quoted in Baraja’s release Steven Ji, a partner at Sequoia China, said: “When Baraja came to us with their unique approach to lidar, we immediately saw how differentiated their approach was. After seeing their technology in action, we could see how well they addressed the limitations of other products. Baraja’s technology will be critical to the entire autonomous vehicle industry.”