Adjusting the refractive index of biological tissues can enhance a range of imaging techniques. 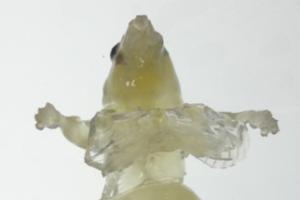 Quiet as a see-through mouse

Biophotonics imaging techniques are yielding ever clearer views of structures and processes within tissues and cells, but the inherent scattering behavior of those tissues is a constant inconvenience.

As well as limiting the depth of penetration for both near-IR and visible light into a biological sample, scatter has a deleterious effect on the contrast and resolution ultimately achievable. Eliminating it, or reducing it as much as possible, is a very desirable goal.

One answer is optical clearing (OC). Natural tissues consist of a complex structure of different substances, but in general terms take the form of items having a higher refractive index - cell compartments, collagen and others - surrounded by media of lower RI, such as cytoplasm.

OC aims to replace the surrounding extracellular material with a substance of higher RI, removing this inhomogeneity and reducing the overall scatter of light by the whole sample. In the most eye-catching implementations, it can make areas of organic material translucent. But the infusion of a suitable material is a complex operation.

"Tissue optical clearing involves a number of biophysical processes occurring upon interaction of tissues with the so-called optical clearing agent or OCA," commented Kirill Larin of the University of Houston, who is chairing a session on the topic at next month's Photonics West event.

"A number of studies have shown that this could be a much more complicated process than it appears. Important parameters such as the molecular structure of the OCAs, structural modifications of collagen fibers or tissue dehydration can affect the clearing. And it seems that different mechanisms can dominate for optical clearing applied to soft tissues compared to hard tissues such as tendons and cranial bones."

The field of optical clearing is currently a dynamic one, with research into new OCAs and diffusion techniques being carried out, along with the development of ways to enhance the efficacy of existing methods. But as Larin and Valery Tuchin of Saratov State University commented, the constraints and implications for the procedure vary for different scenarios; in particular on whether OC is applied to in vivo or ex vivo samples.

For in vivo use, the challenge is to achieve the best clearing result without inducing significant toxicity or structural defects, while a successful ex vivo application must preserve the structure of fluorescent markers or other species of interest that are present. It should preferably also reduce the time taken for clearing, which can run into weeks or even months.

"Currently, only sugar-based inert agents such as glucose, glycerol, and their derivatives and cocktails, can be considered for live applications," noted Larin. "For ex vivo uses, harsher chemicals can be used - and achieve, of course, a better effect."

Live kinetics
Despite the obstacles, several groups have demonstrated notable results for both in vivo and ex vivo OC. These have included a method to make in vivo rat dorsal skin transparent through the topical application of a mixture of PEG400 and thiazone for a period of minutes, allowing an OCT image of the dermal blood flow to be made through the skin.

The thin tissues typically examined by OCT should demonstrate rapid impregnation rates after a topical application of a clearing agent, so these two techniques may prove to be complementary and offer ways to enhance the imaging depth achievable by OCT alone.

Another landmark has been the clearing of an entire mouse body - ex vivo naturally - by a group at RIKEN, Japan, which found that the OCA already used to make mouse brains transparent for imaging could also clear the light-blocking heme chromophore from general blood vessels, given sufficient time.

Some enhancements to the OCA infusion process itself also show promise, including the application of mechanical compression to the tissues, which was employed in the imaging of the rat dorsal skin. This pressure can help to breach the outermost layer of the epidermis, or affect the inherent scattering behavior of the tissue on its own. A combined technique of immersion and mechanical optical clearing could show promise in a number of scenarios.

"OCA impregnation into tissues is more effective in vivo than in vitro, owing to the higher diffusivity of an agent at physiological temperature, and by the involvement of blood and lymph micro-vessels in the process of agent distribution," commented Larin. "The in vivo kinetics of optical clearing are very sensitive to tissue structure, which might make it an effective marker for the signs of certain conditions such as cancer or diabetes in the tissues."

Breaking the barriers
A wide variety of tissue spectroscopy and microscopy methods stand to benefit from advances in OC, by virtue of its adjustment to one of the common barriers faced by most of them. "Raman, confocal, fluorescence, laser scanning, near-field, and multiphoton methods could all be enhanced, along with second-harmonic generation techniques in which scattering is a serious limitation," Larin said.

The performance of photoacoustic microscopy may also be improved; researchers have found that certain OCAs improved the amplitude of the photoacoustic signal detected within ex vivo rat skin from shallow blood vessels, and under certain conditions from deep-seated vessels too.

"Recent achievements in optical clearing have proven that it can break the barriers of optical microscopy," concluded Larin. “Researchers are coming to realize the potential benefits of the clearing techniques, and this field has experienced a boom in development over the last few years."