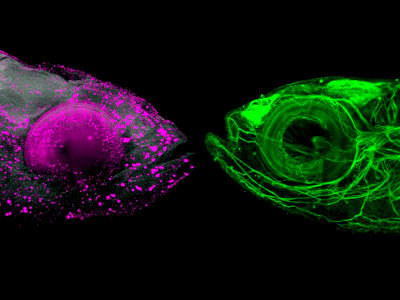 Techniques to render biological tissues transparent to visible light can allow imaging of large networks of cells or whole organs in their complete environment, as an alternative to studying thin layers individually and building up a bigger picture more slowly.

Such optical clearing has traditionally involved replacing the extracellular material surrounding cells with a substance of higher refractive index, reducing the overall scatter of light by the whole sample. Approaches based on both organic solvents and hydrophilic reagents have been developed, but the infusion of a suitable material can be a complex operation.

A project from Austria's Max Perutz Labs, the Medical University of Vienna and TU Wien has now developed a tissue clearing protocol intended to be easily incorporated into existing workflows and combine whole system labeling with a range of detection techniques. The findings were published in Science Advances.

Christened Depigmentation-Plus-Clearing (DEEP-Clear) the new protocol was designed to combine both depigmentation of colored tissues, building on earlier work to remove the characteristic color from the eyes of drosophila fruit flies, and optical clearing of areas of tissues.

Tailored adjustments to the chemistry of a commercial clearing solution were used to increase the depigmentation speed, reduce exposure time, and limit tissue damage, with the goal of allowing all clearing steps to be completed within 24 hours.

At the same time, the protocol was designed to retain compatibility with fluorescence RNA in situ hybridization, or RNA-FISH, an established microscopy technique in which fluorescent probes bond selectively to particular nucleic acid sequences as a means to identify specific RNA molecules.

"Shortening the chemical processing preserves the tissues and organisms and increases the chance that relevant molecules and internal structures are retained," commented Marko Pende, developer of the clearing method.

The new protocol was trialed on samples from five different species representing four distinct animal types - annelids, molluscs, bony fishes, and tetrapods - and sizes up to several centimeters in length.

A light-sheet microscopy (LSM) technique employing a supercontinuum laser source from NKT Photonics was used in the trials. LSM involves illuminating a thin slice of a sample perpendicularly to the direction of observation, reducing both the potential for phototoxic damage to the sample and out-of-focus excitation.

Use of a supercontinuum laser is said by the project to offer a particularly flexible way to excite a number of common or emerging fluorescent labels, simplifying the application of the technique to a variety of samples while allowing multiple excitation colors to be produced from one fiber-coupled single-mode laser beam.

"The combination of a tunable bandpass filter and the supercontinuum laser made it extremely easy to adopt the microscope for any stains labeled to the specimen," noted Pende. "Essentially, you only have to dial a wavelength across the visible and near-infrared spectrum to match it with the optimal excitation of the labeling."

In use, LSM of DEEP-Clear specimens captured 3D images with a thickness of close to 6000 microns and a length of several centimeters, said by the project to be pushing the size limits imposed by regular confocal analysis. This should allow molecular and cellular research in a variety of species that exhibit highly interesting, but to date poorly explored, neuroscientific features.

"The speed and broad compatibility of DEEP-Clear remove existing restrictions in the use of tissue clearing and imaging approaches beyond more selective contexts, and thereby provides a powerful tool for the exploration of novel model systems across scales."