New single-photon avalanche diodes will be central to the photonic point-of-care system. 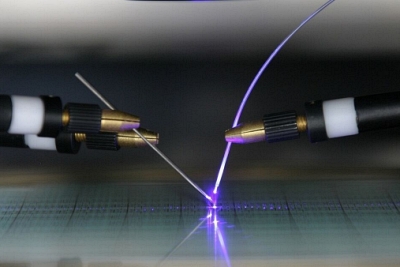 A new rapid fluorescence-based detection system for tuberculosis (TB) is under investigation in Germany, thanks to a €5.1 million, three-year project part-funded under the Photonik Forschung Deutschland program.

The “FluoResYst” project, coordinated by Mahavir Singh at the Braunschweig-based diagnostics firm Lionex, kicked off with its first meeting earlier this month. The ultimate aim is to develop a compact and rapid system for detecting multi-drug resistance in TB infections.

The project also involves, among eight partners in all, specialist integrated circuit manufacturer iC-Haus in Bodenheim, the Fraunhofer Institute for Cell Therapy and Immunology in Potsdam, and Jena-based Microfluidic ChipShop.

Time-resolved fluorescence
According to the World Health Organization’s latest report on the topic - published in October 2021 - until the arrival of Covid-19 TB was the leading cause of death from a single infectious agent, ranking above HIV/AIDS.

WHO’s estimates for 2020 show 1.3 million TB deaths among HIV-negative people, and an additional 214,000 among HIV-positive people - with both figures up on the 2019 totals, and the combined total back up to a level last seen in 2017.

A key target for WHO, and one of the United Nations' goals, is to end the tuberculosis epidemic by 2030. But a growing problem is the incidence of multi-drug resistant variants of the bacterium Mycobacterium tuberculosis, particularly in developing countries where rapid diagnosis is more challenging due to a lack of laboratory infrastructure.

This is precisely the problem that the FluoResYst consortium is looking to tackle, with photonics technology that can be used to provide point-of-care diagnostics - with no need for a large central laboratory.

According to a project abstract, the principle of the detection platform is based on time-resolved fluorescence measurement, but without the complex optics and wavelength filters that are typically required.

“This is made possible by using picosecond [pulsed] lasers and single-photon avalanche diode (SPAD) arrays, whose switching times are optimized for the detection of short-lived fluorochromes,” explains the abstract.

”The molecular-biological-biochemical approach consists of a novel detection method that literally lights up the multi-resistance genes and thus detects them using the fluorescence quenching effect of a fluorochrome-binding antibody.”

Fast SPADs critical
According to consortium member iC-Haus, the key innovation is the combination of fast fluorescence effects with fast detectors.

“The innovative method is designed to shorten complex manual laboratory steps for biochemical detection and make them available already in the instrument, on the one hand, and to achieve rapid detection and evaluation via integrated optoelectronic components, on the other,” reports the firm.

“If a sample with the gene segment of interest is added, this binding dissolves and the DNA lights up,” iC-Haus adds.

Fluorescence is a fast physical process in which absorbed light is re-emitted at a longer wavelength within nanoseconds of the initial absorption.

“To design the detection system cost-effectively, excitation and fluorescence light are to be distinguished by their decay times rather than by expensive optical filters,” iC-Haus explains.

“The fluorescent dyes used for the quenching effect have very short afterglow times in the nanosecond range. In order to measure the multi-resistant genes with time resolution, a very fast image sensor and an even faster laser as excitation light, which switches off in the picosecond range, are required.”

For iC-Haus’ role within the project, that means developing new integrated circuits - specifically for image sensors based on new SPADs that operate at gigahertz speeds.

It is hoped that the combination of the biochemical fluorescence quenching antibody assay, and the photonic integration of time-resolved fluorescence will yield a new diagnostic scheme that greatly simplifies current methods requiring complex and costly instrumentation.

“Thus, the development of the platform will not only improve tuberculosis diagnostics and the determination of multi-drug resistance but also contribute to the containment of the disease by accelerating on-site diagnostics,” iC-Haus stated.

“Its adaptability to other multi-drug resistance detection will also enable the optimization of diagnostics for other infections frequently affected by resistance.”

• For details of the FluoResYst project and a list of the eight collaborative partners, follow this link.