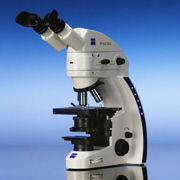 “The Primo Star iLED is a new design in this field, with a number of innovative elements intended to lead to improvements in TB detection,” Silvia Zenner-Gellrich of Carl Zeiss explained to optics.org.

These beneficial features include the use of LEDs as illumination sources, specially designed eye cups that avoid the need to work in a darkroom, and a heavily subsidised price tag to suit the 22 countries identified as high TB-burden territories by the World Health Organisation.

The system includes a blue LED emitting at 455 nm for fluorescence microscopy, along with a separate white-light source provided by a second LED.

“LEDs are inexpensive and energy-efficient, compared to the mercury bulbs traditionally used in this application,” noted Zenner-Gellrich. “In addition the LED-fluorescence excitation in the new system is done using reflected light. This means that there is no risk of glare and ensures that the signal-to-noise ratio is excellent, producing good quality images.”

The long lifetime of LEDs, typically between 10,000 and 50,000 hours, means that there should be no need to change the sources for the entire working lifetime of the microscope.

The economic impact of changing to LEDs could be considerable in the Primo Star iLED’s target market. According to figures from Carl Zeiss, it brings down the running costs of fluorescence microscopy from more than a dollar an hour to less than half a cent.

The design also makes it easy to switch between fluorescence and brightfield microscopy in the same machine, combining the two approaches in one system. “Since money is short in high TB-burden countries, this two-in-one solution is a perfect answer,” said Zenner-Gellrich.