Commercial deployment will connect London’s Docklands area with sites in the City and high-tech hub known as the M4 corridor. 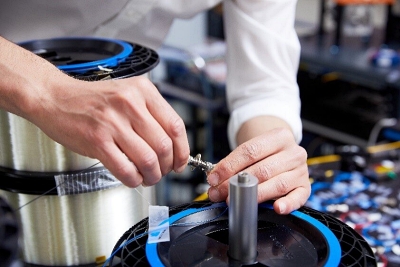 UK-based communications giant BT and Toshiba are to build and test what is believed to be the first commercial metropolitan network to feature quantum encryption.

Multiple endpoints
QKD harnesses the quantum nature of individual photons to generate cryptographic keys, such that any perturbation of the key exchange by a potential hacker is immediately evident.

Toshiba and BT have collaborating on the technology for several years, and last year installed a point-to-point QKD-secured network between the UK’s National Composites Centre, and the Centre for Modelling and Simulation, both located in Bristol.

The London network will take that a step further: “Deploying a full quantum-secured metro network environment with multiple endpoints requires new approaches to integration and management,” stated the two firms.

“This new network will extend the solution to serve multiple customers across a wide metropolitan area.”

London is seen as an ideal environment to deploy and trial the technology, because of the density of customers handling extremely sensitive data - notably financial and legal institutions.

The new network will connect the City of London with the Docklands area and the so-called “M4 corridor” high-tech hub region around Slough, to the west of the city.

“The initial focus will be to provide trials for enterprise customers who are carrying sensitive traffic (such as database backups) between sites, and to explore potential future offerings such as encrypted links and ‘quantum keys-as-a-service’,” added BT and Toshiba.

Quantum threat
According to the two firms, the pace of progress in quantum computers presents an increasing threat to key exchanges, authentication, and digital signatures based on conventional encryption.

“Some estimates suggest that quantum computer enabled security attacks are possible within five years, and likely to occur within ten years,” they report.

“Securing encrypted traffic is a pressing problem today, because data which requires long-term security could be at risk of ‘store today, crack later’ attacks, in which the key exchange and encrypted traffic are stored now and broken when a sufficiently powerful quantum computer is available.”

The pair see QKD-based security as unique because the key-exchange step, based on physical attributes of photons such as their polarization or phase, is secure against any computational or mathematical advance, and therefore immune to any present or future attacks by quantum computers.

The hardware is said to produce 1000’s of keys per second, and offer the longest range of any commercially available fiber QKD system.

“Toshiba’s innovative multiplexing compatibility allows the data and the quantum keys to be transmitted on the same fiber, eliminating the need for costly dedicated infrastructure for key distribution,” claims the Japan-headquartered firm.

Earlier this year, a team led by Andrew Shields at Toshiba’s Cambridge QKD unit published details of a new way to dramatically extend the range of quantum-encrypted communication over optical fiber.

Using so-called “dual-band stabilization”, they were able to cancel out temperature fluctuations in fiber that have the effect of scrambling quantum bits (qubits) of information over long distances.

Shields said that the advance would extend the maximum span of a quantum link to 600 km and beyond, meaning that it would be possible to connect cities across countries and - alongside satellite QKD - even continents, without the need to use trusted intermediate nodes.