MIT embeds nanoparticles in plant tissue to store and release photons for lighting and signalling. 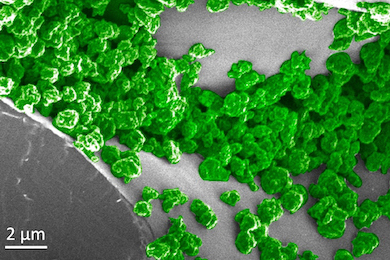 A project at MIT has developed a nanoparticle-based method to make plants capable of storing and emitting light, potentially allowing plant-based reflectance devices, signaling, and lighting.

As published in Science Advances, the new project represents a development of research first launched at MIT in 2017 into the creation of glowing plants, but light yield in the new experiments is said to be an improvement over those initial studies by a factor of 10.

"We wanted to create a light-emitting plant with particles that will absorb light, store some of it, and emit it gradually," said Michael Strano of MIT. "This is a big step toward plant-based lighting."

Strano's MIT lab has investigated the field of "plant nanobionics," with the end goal of creating plants capable of taking over many of the functions now performed by electrical devices. This would represent an opportunity to rethink the design and fabrication of devices ordinarily produced from plastic and circuit boards and ultimately disposed of as waste, according to MIT.

The previous studies at MIT included creation of glowing plants through the infusion of silica nanoparticles carrying luciferase and luciferin, substances capable of generating a glow from within the plant. However, no previous work has focused on manipulating the optical properties of the plant leaves themselves as a way to control absorption, light storage, and re-emission.

"This is despite the obvious benefits of such control to the overall aim of creating living plant light sources and optical sensors," noted the project.

The new study used the concept of a "light capacitor," whereby a material introduced into the inner mesophyll tissue used by a leaf to support gas and liquid exchange could also store light and then gradually release it over a period of time.

The bold idea of ambient light from living plants

This effectively uses the mesophyll of living plants as biocompatible substrates for the photonic display of thin nanophosphorescent films, using photoactive materials whose emission properties allow multiple excitations without the application of chemical reactions or infusions.

The project used silica-coated nanoparticles of strontium aluminate around 650 nanometers in size as the phosphor, and allowed them to infuse as a liquid into the mesophyll of plant leaves through the surface stomata pores. Each leaf was then charged with ten seconds of exposure to a 400-nanometer LED light, after which the plants could emit light for about an hour. The light was brightest for the first five minutes and then gradually diminished, although the plants could be continually recharged for at least two weeks.

Experiments showed that photoemission of up to 4.8 x 1013 photons per second could be achieved using several different plant species, including basil, watercress, and tobacco, with the nanoparticles creating 2-micron phosphorescent films on the mesophyll.

The project also made a point of infusing nanoparticles successfully into a large-leafed plant, the Thailand elephant ear with leaves that can be more than 30 centimeters wide, a size that could make such plants useful as practical outdoor lighting sources.

"Creating ambient light with the renewable chemical energy of living plants is a bold idea," commented Sheila Kennedy, professor of architecture at MIT who has worked with Strano's group on plant-based lighting. "It represents a fundamental shift in how we think about living plants and electrical energy for lighting."