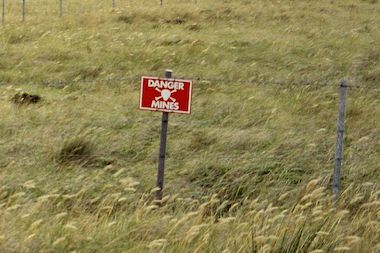 Buried landmines represent a major threat to life and an impediment to relief efforts in several parts of the world, so landmine detection technology is in high demand.

Advances in the design and utility of unmanned aerial drones have been an asset in landmine location, potentially allowing suitable optical sensing technology to be mounted on a drone and survey the territory of interest from the air, without direct human involvement.

Raman spectroscopy has become one of the most actively studied techniques for identifying landmines, due to its ability to detect the particular spectral fingerprints of explosive substances and do so at potentially high rates of selectivity. However, the presence of contaminants and other environmental factors is known to be a potential hurdle for Raman methods.

Different Raman variants have been used to increase Raman's sensitivity, such as surface enhanced Raman scattering (SERS) in which particular molecules adsorbed on the active sensor surfaces can significantly enhance the inherent Raman scatter from a sample. Another is spatially offset Raman spectroscopy (SORS), applied to the specific detection of explosives and toxic chemicals by the UK Border Force in 2018.

"Our work is focused on the detection of TNT-based explosive in the landmines," said Karnik. "TNT, or trinitrotoluene, can be leached or leaked through the landmines, either due to faulty casings or other environmental factors, and nitroaromatics associated with TNT can often be found in soils near buried landmines."

In each scenario the RGU team found that with optimized sample preparation its Raman analysis could successfully detect the nitroaromatics associated with TNT, with the water-contaminated samples providing the strongest Raman signal strength, and the dry soil samples providing the weakest signal.

Although the project intends to explore ways to further reduce the inherent interference of the soil matrix, the study already demonstrates that Raman-based detection of nitrotoluene can provide important indications of environments infected by leaked TNT mines, and RGU envisages complementing the technique with other modalities such as Lidar or laser-induced breakdown spectroscopy (LIBS), which can be mounted alongside Raman instruments on arial drones.

"Detecting these chemicals in different water resources, terrains, types of soils and environmental areas, will safeguard the environment and protect flora and fauna" noted Karnik. "It will definitely help the humanitarian de-mining process."