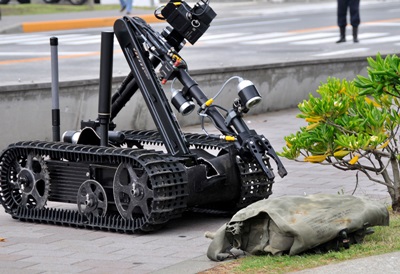 by Ford Burkhart in Baltimore
A new backpack-sized standoff-detection device from US-based Alakai Defense Systems will let a soldier identify a suspected explosive from across a large room, possibly saving lives.

The laser-based Raman tool has a typical range of one to ten meters, detecting some threats at the lower end and some much farther away.

“It’s a simple point and shoot system,” said Robert D. Waterbury, director of engineering at Alakai, in Largo, Florida. The system is called PRIED, standing for Portable Raman Improvised Explosive Detector. It was a finalist in this year’s Prism Awards, in the detectors and sensors category.

“You pull the trigger and scan around the target area to find out if it’s an explosive or other hazardous chemical, including those used by ISIS today,” Waterbury said.

If you’re a first responder or soldier at a scene looking for a possible bomb, you could stand at the door to a dwelling, and decide which targets are suspicious. “Then, you simply use your eyeballs to spot suspected explosive residue, and point and shoot it,” Waterbury said. “You don’t have to go touch it, as you would with older methods.”

Detection time is fast, one to 10 seconds, and if it finds the suspected material, PRIED will flash a red light and can send detailed information to an Android device. If there’s no sign of an explosive, it runs for 10 seconds without a signal, and you know you haven’t detected a threat.

“If you see white powder now, you have to go up and touch it with some sensor to find out if it is an explosive,” he added. “With the PRIED system, you can stand across a room, perhaps behind a blast shield, and shoot [the laser] around it and get a reading that will tell you if is an explosive substance.”

Alakai is currently taking orders for the PRIED system, and expects to start delivery within six months.

The system could be used to detect chemical residues on a suspect’s hands, on clothing, on money, or on a cell phone, and the goal of Alakai is to supply products that can be used at critical locations.

The PRIED systems include an internal camera that records the target for later forensic purposes.

One challenge, Waterbury said, is to keep the quarter-inch interrogation beam on its target for the 10-20 seconds needed to generate a detectable Raman signal. One option is to steady the system on a tripod or sandbag to hold the beam in place.

The PRIED system received development funding from the Army Research Office and the Department of Defense.