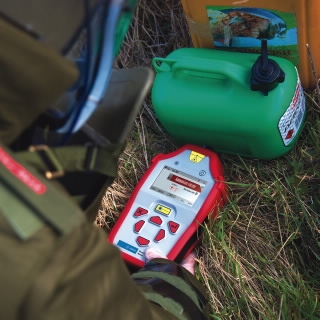 Customs and border officers are set to use Agilent’s handheld “Resolve” systems to spot explosives, drugs, chemical weapons, and toxic chemicals according to their molecular fingerprint.

Discovered by researchers at the UK’s Central Laser Facility (CLF), SORS was subsequently developed into commercial products by the CLF spin-out company Cobalt Light Systems, before it was acquired by Agilent just over a year ago for £40 million.

Cobalt had already enjoyed significant success in the airport security sector, with its “Insight200” systems widely deployed in European airports to screen liquids in passenger luggage.

Unique abilities
While the Resolve kit relies on the same technique as the airport security equipment, it is much more compact – Agilent's data sheet indicates a shoebox-type footprint and a total weight of just 2.2 kg.

Agilent’s head of detection and security with Raman spectroscopy, Robert Stokes, said in a company release: “Resolve’s unique ability to detect hazardous substances through opaque packaging is ideal for use in border applications as the technology reduces the risk of exposure to the operator.

“We are working closely with UK Border Force as they deploy Resolve systems across the UK, providing comprehensive training sessions as well as specialist Reachback support.”

Agilent added that the deployment was part of a wider multi-million pound framework agreement with the UK’s Home Office.

The portable Resolve kit is based around an 830 nm laser source and custom optics designed to ensure safe operation with sensitive samples. Agilent states that while in SORS mode the analyzer identifies materials in around a minute, with no need to open the vessel containing the potentially hazardous chemical.

In a recent application note, the Agilent team described how Resolve was able to differentiate between benign West African palm oil containers and those containing home-made, commercial, and military explosive materials including TNT, Semtex, and a mixture of ammonium nitrate and sucrose.

As well as the unique through-barrier mode offered by the SORS approach, the handheld scanners are able to carry out more conventional surface analysis of materials inside transparent bags, and identify liquid samples inside glass vials.