Led by University of Glasgow spinout Vector Photonics; based around proprietary PCSEL sources. 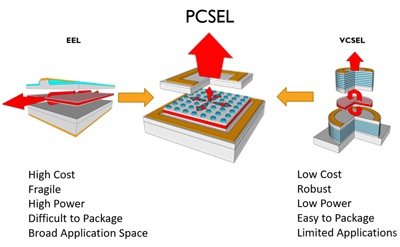 Vector said it believes that this is a market that will quadruple to £7 billion ($10 billion) by 2025.

Vector is leading the £1.5 million project and is joined by a Japanese, semiconductor, epitaxy, manufacturer and the UK’s Compound Semiconductor Applications Catapult (CSA Catapult), which will undertake chip reliability testing.

An industrial equipment manufacturer in Japan, will provide product assessment and, ultimately, a route to market, although the chips produced will be suitable for any printer manufacturer, says Vector.

Dr. Richard Taylor, CTO at Vector Photonics, commented, “3D metal laser printers hold metal powder in a powder bed at just below its melting point. Currently, CO2 or fibre lasers, directed by mirrors, scan over the surface of the powder, melting it onto the layer below, in a process called selective laser melting (SLM).

“We believe that PCSELs will enable an entirely new class of next generation, metal printers and contribute to even greater market growth.”

Neil Martin, CEO, Vector Photonics, added, “Our PCSELs produce the speed performance of edge emitting lasers (EELs) and VCSELs, whilst their tested and packaged cost is 50% that of EELs and they deliver more than ten times the power of VCSELs.”