University of Houston project could open up new uses for microfluidic technology. 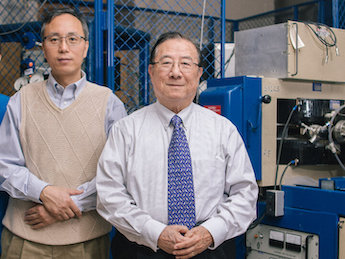 A new generation of micropumps based on research at the University of Houston could lead to more versatile applications for microfluidic technology, and increased opportunities for integration with other components.

The breakthrough is based on designing a micropump around the photoacoustic effect, whereby a short laser pulse generates a small ultrasound signal from the target, due to the brief rise and fall in temperature that results.

Photoacoustics has been widely studied for its potential impact in medical imaging and biophotonics, especially as a route to mapping blood flow and circulation in healthy and diseased tissues. The Houston project, however, takes the technology in a different direction, as reported in PNAS.

"This new micropump is based on a newly discovered principle of photoacoustic laser streaming, involving the use of a gold-implanted plasmonic quartz plate," commented the researchers. "Under a pulsed laser excitation the plate can generate a directional ultrasound wave, able to drive a fluid via acoustic streaming."

A 2017 study led by Houston researcher Jiming Bao paved the way for the new breakthrough. It used the concept of acoustic streaming, which typically refers to fluid motion driven by acoustic oscillations, to demonstrate a novel optofluidic principle: motion in an aqueous solution of gold nanoparticles, induced by a focused laser spot but which could then continue when the gold solution was replaced by pure water.

That effect relied on the fact that some of the gold nanaoparticles had become embedded in the wall of the vessel. When the pump laser illumination was subsequently applied, resonant coupling between the glass and the embedded nanoparticles effectively created a cavity decorated with plasmonic nanoparticles, which in turn generated an ultrasound signal via the photoacoustic effect. Fluid then flowed under the action of this ultrasound signal.

Bao noted at the time that the principle was general and could in theory be applied to any liquid, potentially opening up new applications in optofluidics as well as traditional photoacoustics,

The new research represents a further development of the principle. Instead of being embedded in a glass cavity, the gold nanoparticles are implanted in a quartz substrate said to be "about the size of a fingernail," and then irradiated with a pulsed laser.

The nanoparticles offer a large number of targets for the laser, which can be aimed very precisely, so any point on the plate can generate a long-lasting ultrasound wave, according to the project team. Manipulating and programming laser beams can then create a single pump, a moving pump, or multiple pumps.

Since many light-absorbing materials have been identified for efficient photoacoustic generation, this kind of photoacoustic micropump could prove to be valuable in a diverse set of applications, and straightforward to integrate with other microfluidic assemblies. Biomedical devices such as drug delivery systems could benefit, as well as microfluidic and optofluidic research.

“The mechanisms of how and why this works are not yet completely clear,” commented Houston group leader Wei-Kan Chu. “We need to understand the science better, in order to fully exploit the potential applications.”