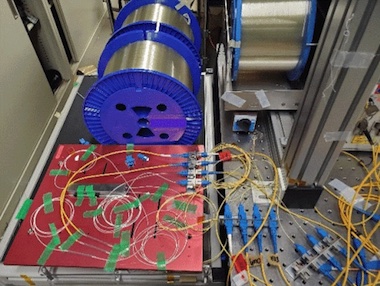 A group at Japan's National Institute of Information and Communications Technology (NICT) has demonstrated long-distance data transmission of 319 Tb/s over a distance in excess of 3,000 kilometers.

This figure represents the first S, C and L-bands transmission over long-haul distances in a 4-core optical fiber of standard 0.125-millimeter outer diameter, according to the NICT team.

The project utilized a transmission system "that makes full use of wavelength division multiplexing technology by combining different amplifier technologies, to achieve a transmission demonstration with data-rate of 319 terabits per second over a distance of 3,001 km."

This represents a world record for optical fibers with standard outer diameter, noted the project team.

NIST commented that interest in optical fibers with the same 125-micron cladding diameter as standard single-mode fibers has grown due to their compatibility with conventional cabling infrastructure and the prospect of combining such fibers with wider transmission bandwidths, to meet the expected growth in transmission capacity.

"Until now, NICT has built various transmission systems that make use of wavelength division multiplexing across the C and L-bands together with state-of-the-art modulation technology to explore high data-rate transmission in a range of new optical fibers," commented the Institute.

"Recently, NICT and research groups around the world have begun to explore S-band transmission, leading to several new records for transmission capacity in optical fibers, but transmission distance has been limited to only a few tens of kilometers."

The backbone of new communications services

In a presentation of its record figure to the International Conference on Optical Fiber Communication (OFC2021), the project team said its long distance transmission, not previously demonstrated with S-band signals, was enabled by constructing an experimental recirculating transmission loop set-up combining rare-earth doped fiber amplifiers with Raman amplification distributed along the transmission fiber itself.

"The combined transmission bandwidth, greater than 120-nm, allowed 552 wavelength-division multiplexed channels, by adopting two kinds of doped-fiber amplifier together with Raman amplification to enable recirculating transmission of the wideband signal," noted the team.

"The standard-cladding-diameter 4-core optical fiber can be cabled with existing equipment, and it is hoped that such fibers can enable practical high data-rate transmission in the near-term, contributing to the realization of the backbone communications system necessary for the spread of new communication services."

The next steps at NICT will include further development of this wide-band, long-distance transmission system, alongside efforts to further increase transmission capacity of low-core-count multi-core fibers and other novel fibers.

"Furthermore, we will work to extend the transmission range to trans-oceanic distances," said the project.