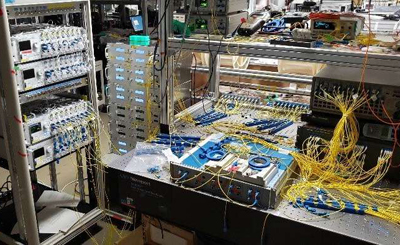 Dr Hideyuki Tokuda, president of NICT, commented that this achievement depended on large-scale and low-loss optical switches based on MEMS technology, three types of next-generation spatial-division multiplexing fibers, and included the routing of signals with capacities from 10 terabit per second to 1 petabit per second. This corresponds to more than 100 times the capacity of currently available networks.

“This is a major step forward towards the early implementation of the petabit-class backbone optical networks capable of supporting the increasing requirements of internet services such as broadband video streaming, 5G mobile networks or Internet of Things,” the Institute stated in a news release. “As such, the results of this demonstration were acknowledged by the scientific community with a post-deadline presentation at the 45th European Conference on Optical Communication, 2019.”

NICT has collaborated extensively with academia and industry to develop new types of optical fiber technologies and provide petabit-class communications for short- and long-reach backbone networks as well as datacenter networks. These have included achievements such as the record petabit-class transmission in a single fiber, and the longest link using spatial division multiplexing amplifiers, in March, 2019.

However, petabit-class transmission requires petabit-class switching technologies to manage and reliably direct large amounts of data through complex networks. Up to now, such technologies have been beyond reach because the existing approaches are limited by complexity and performance.

NICT has implemented a network demonstration using large-scale spatial optical switching, aiming at petabit-class optical networks based on spatial-division multiplexing. The experimental network testbed supported data rates from 10 terabit/s up to 1 petabit/s over three types of multicore fibers and included practical requirements of real networks, such as protection switching.

The total capacity of the network was 1 petabit/s, corresponding to simultaneous 8K TV broadcasting to 10 million people. The system was demonstrated in four fundamental scenarios that NICT says "constitute the building blocks of the next-generation optical fiber networks", meaning:

See these achievements arranged in the following table: 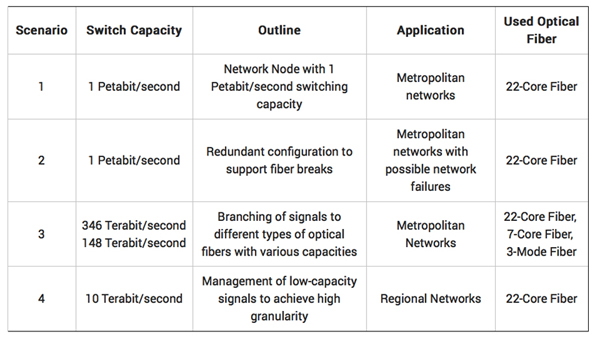