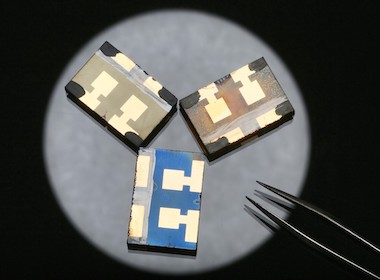 The performance of perovskite photovoltaic cells has now improved to the point where they are considered ready for industrial-scale production, potentially allowing PV structures to be manufactured in a more energy-efficient manner than is possible with silicon cells.

Studies of the long-term performance and lifetime behavior of perovskite cells are still taking shape, however, with Sandia National Laboratories recently describing the current standards system around the materials as being "like the Wild West."

An additional concern relates to the environmental impact of perovskite cells which fail, since the cells normally include lead which can then be released from the cells into their surroundings. A project at Swiss research lab EPFL has now developed a possible solution to this problem which does not interfere with the light-conversion efficiency of the cell.

As published in Applied Materials & Interfaces, the breakthrough involves the addition of a transparent phosphate salt intended to prevent lead from seeping into the soil in the event of perovskite solar panel failure.

"The solar energy-to-electricity conversion of perovskite solar cells is unbelievably high, around 25 percent, which is now approaching the performance of the best silicon solar cells," said László Forró of EPFL. "But their central element is lead, which is a poison. If the solar panel fails, it can wash out into the soil, get into the food chain, and cause serious diseases."

The problem is partly a consequence of the water solubility of the constituents employed in construction of the perovskite cells, which plays a part in making the manufacture of the cells straightforward and less expensive. But when a panel breaks the same solubility can threaten to flush the lead easily into the environment.

This issue has drawn much and intensive research because it is the main obstacle for regulatory authorities approving the production of perovskite solar cells on a large, commercial scale, according to EPFL. However, attempts to synthesize non-water-soluble and lead-free perovskites have produced cells showing poor performance.

EPFL's answer, investigated as part of the recently concluded Horizon 2020 Picoprop research into hybrid halide perovskites, introduces a transparent phosphate salt which does not block solar light but does react with lead in the event of solar panel failure, producing a water-insoluble compound that cannot leach out to the soil and which can also be recycled.

"A few years ago, we discovered that cheap and transparent phosphate salt crystals, like those in soil fertilizers, can be incorporated into various parts of the sandwich-like lead halide perovskite devices, like photodetectors, LEDs or solar cells,” commented Endre Horváth of EPFL.

"These salts instantaneously react with lead ions in the presence of water, and precipitate them into extremely non-water-soluble lead phosphates."

According to the project's published paper, this finding and the research it stimulates should enable lead halide perovskite solar cells to reach a similar environmental risk category as commercially available, nonwater-soluble heavy metal-containing CdTe and gallium diselenide technologies.

Since the same approach can be used to build other functional photodetectors, EPFL envisages the broad community of researchers and R&D centers working on various solar cells and LED devices implementing it in their respective prototypes.

“This is an extremely important study - I would say, a central one - for large-scale commercialization of perovskite-based solar cells," concluded László Forró.