An optical manipulation technique that can control the position, orientation, and shape of microscopic samples with complex shapes has been developed by a research team led by Professor YongKeun Park of the Physics Department at Korea Science Academy, KAIST.

The work has been described this week in Nature Communications.

Controlling the positions of the beam focus enabled researchers to hold the particles and move them freely to other locations so they coined the name “optical tweezers,” and have been widely used in various fields of physical and biological studies. 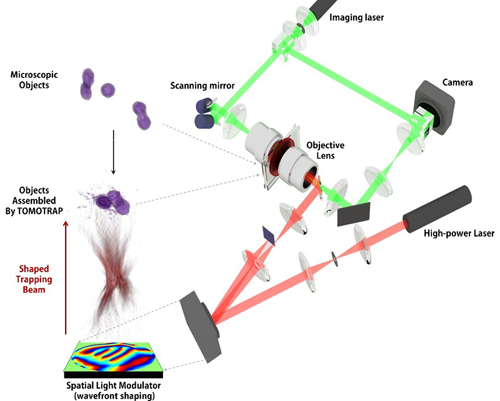 So far, most experiments using optical tweezers have been conducted for trapping spherical particles because physical principles can easily predict optical forces and the responding motion of microspheres. For trapping objects with complex shapes, however, conventional optical tweezers induce unstable motion of such particles, say the KAIST researchers, and controllable orientation of such objects is limited, which hinder controlling the 3-D motion of complex-shaped microscopic objects such as living cells.

The team has developed a new optical manipulation technique that can trap complex objects of arbitrary shapes. This technique first measures 3-D structures of an object in real time using a 3-D holographic microscope, which shares the same physical principle of X-ray CT imaging.

Moreover, by controlling the shape of light to have various positions, directions, and shapes of objects, it is possible to freely control the 3-D motion of the object and give the object the desired shape.

This process resembles the generation of a mold for casting a statue having desired shape so the researchers coined the name of the present technique “tomographic mold for optical trapping (TOMOTRAP).” 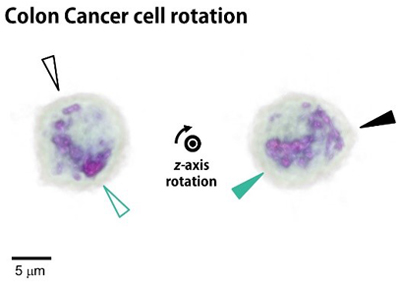 The team succeeded in trapping individual human red blood cells stably, rotating them with desired orientations, folding them into an L-shape, and assembling two red blood cells together to form a new structure.

Furthermore, colon cancer cells having a complex structure could be stably trapped and rotated at desired orientations. All of which have been difficult to be realized by the conventional optical techniques.

Professor Park commented, “Our technique has the advantage of controlling the 3-D motion of complex shaped objects without knowing prior information about their shape and optical characteristics, and can be applied in various fields including physics, optics, nanotechnology, and medical science.”

Dr. Kyoohyun Kim, the lead author of this paper, noted that this technique can induce “controlled deformation” of biological cells with desired shapes. “This approach can be also applied to real-time monitoring of surgical prognosis of cellular-level surgeries for capturing and deforming cells as well as subcellular organelles,” said Dr Kim.