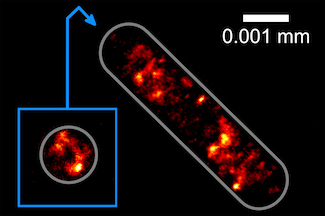 Developers of super-resolution techniques continue to find inventive ways to push beyond the theoretical diffraction limit in optical microscopy, but certain practical hurdles have so far remained in place.

One is the lengthy data acquisition time associated with localization techniques such as PALM and STORM, which gather large numbers of individual image frames before producing each super-resolution result - itself a strategy to avoid sample damage from the relatively high-energy laser irradiation needed.

This has meant that the samples being examined must be held firmly in place and remain stable for the duration of the process, through attachment to glass substrates or chemical fixation. But the fragility of biological specimens means that these attachment methods are less than ideal, and the mounting technique may also limit visual access to the specimen.

A project led by Bielefeld University has developed an alternative approach, using a combination of holographic optical tweezers and single-molecule localization microscopy. The work was published in Nature Communications.

"Our new method enables us to take cells that cannot be anchored on surfaces and then use an optical trap to study them at a very high resolution," commented Bielefeld's Thomas Huser. "What's special is that the samples are not only immobilized without a substrate, but can also be turned and rotated. The laser beam functions as an extended hand for making microscopically small adjustments."

Alignment on demand
Optical tweezers exploit the ability of strongly focused laser beams to trap small volumes of matter at the focus points, thanks to the physical force exerted by the intensity gradients involved. The Bielefeld team generated its holographic optical tweezers from a 1064-nanometer 2-watt laser, shaped and dynamically controlled by a spatial light modulator.

This mounting system was used to hold samples for imaging by dSTORM (direct stochastic optical reconstruction microscopy), a variant of STORM that records the photoswitching of a single fluorophore - other STORM methods can rely on other more complex labeling strategies.

To test the system, the team applied it first to the imaging of labelled polystyrene microspheres, and then to E.coli bacteria in suspension. According to the team, structural features of the bacterial chromosome with dimensions below 100 nm could be resolved, allowing the images to reveal multiple nucleoids within a single cell.

The significant advantage of the new technique is its ability to alter a sample's alignment relative to the image plane. Having imaged an E. coli cell held horizontally by the optical traps, the team were able to then force it to position itself vertically, by turning one trap off and allowing the cell to align with the axial propagation of the Guassian laser beam.

"This feature bypasses the inherently poorer spatial resolution of 3D-localization microscopy along the optical axis," noted the team in its published paper. "This is even more important in combination with fluorescent proteins, which emit substantially fewer photons than synthetic dyes and yield poor axial resolution in common 3D-localization schemes."

The next steps for Huser and the project include modifying the method so that it can observe the interplay between living cells, studying dynamic biological processes such as the penetration of germs into cells.