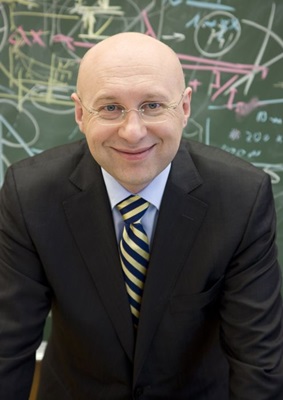 Optical technology that has overcome the traditional physical limitations of the microscope has won the 2014 Nobel prize for chemistry.

Developed by Stefan Hell in 2000, the technique of stimulated emission depletion (STED) microscopy was the first to overcome Ernst Abbe’s diffraction limit, which states that the resolution of a light-based microscope cannot be better than about 200 nm – half of the wavelength of the incident light.

But by rapidly switching the fluorescence of molecules on and off with lasers, the STED technique is able to overcome that fundamental limitation, and has now allowed biologists to observe phenomena like synapse formation in the brain, and to track the movement of key proteins involved in a range of diseases.

Hell shares the award with Eric Betzig and William Moerner, who separately laid the foundation for a different but related method, known as single-molecule microscopy. It uses the fluorescence of individual molecules so that superimposed images yield a dense “super-image” with a resolution beyond the normal limitation.

STED requires two laser sources. One stimulates fluorescent molecules, while another quenches that fluorescence in all but a tiny area of the sample. Scanning over the target generates an image with a resolution that also beats Abbe’s stipulated limit.

Live imaging
Born in Romania but a German citizen, Hell is now director of the Max Planck Institute for Biophysical Chemistry in Göttingen, and also the divisional head at the German Cancer Research Center in Heidelberg, where the STED technique and variants that have built on its principles are regularly used to observe the development of cancer cells and receptors on the surface of viruses.

Reacting to the award, Hell said that he had been reading a scientific paper when the Nobel committee chair’s call came through. “It was a total surprise, I couldn’t believe it,” he said, adding that until he recognized the voice of the caller he even thought it might be a hoax.

“Gradually I realized that it was true,” said Hell, before finishing the paragraph of the paper that he had been reading and then calling his wife.

Recalling the period in the 1990s when he developed the STED technique, he said:

“I had realized that so much physics had happened during the twentieth century that it was impossible that there was no physical chemistry phenomenon that would allow you to overcome the diffraction barrier.

“I felt that there must be some way [to do it] and eventually I found a way.”

In recent years Hell, a regular speaker at events like the BiOS symposium within Photonics West, has advanced the STED technique with methods such as “gated” STED (gSTED), which allows lower photon fluxes to be used to generate the super-resolution images. High photon fluxes can be a problem when sensitive molecules are being imaged.

In a plenary talk at the 2012 BiOS symposium, Hell described how STED had been used to directly observe synapses “firing” in a live mouse brain, while super-resolution microscopes have now been commercialized by the likes of Leica Microsystems and Zeiss.

Commenting on the award of both the physics and chemistry Nobel prizes to developers of optical technology this year John Dudley, chairman of the International Year of Light steering committee, said:

"Their work shows the importance of optical science in so many different ways: from providing enabling technologies which have impact on our daily lives and which can address challenges in quality of life and energy, to developing fundamentally new imaging techniques at the nanoscale that are already having tremendous interdisciplinary impact."