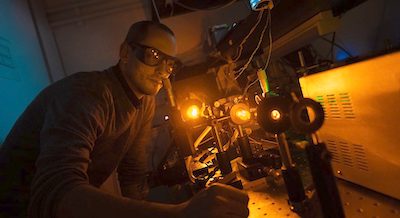 Ground-based optical telescopes routinely make use of artificial guide stars, generated at around 90 kilometers altitude by the action of a laser beam energising atoms in the atmosphere's sodium layer.

The guide star allows users to correct atmospheric aberrations of light passing through the atmosphere, restoring clarity to telescopic images that would otherwise be degraded and distorted. But there is always interest in developing lasers with the power and spectral characteristics needed for brighter single or multiple guide stars.

A project at Australia's Macquarie University has now developed an improved laser system for guide star generation, that it believes will help large optical telescopes to gather more accurate data. The work was published in Optics Letters.

The breakthrough was based on the use of Raman lasers, sources in which the fundamental light-amplification mechanism is stimulated Raman scattering rather than stimulated electronic transitions. In particular the project employed a diamond Raman laser, in which diamond acts as the Raman medium within a laser cavity.

Diamond is known to have improved Raman gain coefficient and thermal conductivity than many other materials used as Raman media, but until recently research into diamond Raman lasers - work in which Macquarie University has been at the forefront - was held back by limited availability of synthetic crystals of sufficient quality.

A team from the University's MQ Photonics research center has for the first time demonstrated a continuous-wave 589 nanometer diamond laser for guide star applications, said to deliver higher power and efficiency than previous guide star laser systems of its type.

"We believe that the diamond approach will provide an interesting system for greatly expanding the brightness and quality of future guide stars," commented research leader Rich Milden. "The light-atom interaction in the sodium layer happens to be extremely complex, but this brings forth interesting opportunities to adapt lasers to boost the performance of earth-to-space adaptive optical systems."

In its published paper, the project reports an approach based on a diamond Raman laser with intracavity Type I second-harmonic generation pumped using a 1018.4 nanometer fiber laser. A first demonstration with output power of 22 watts at 589 nanometers was obtained at 18.6 percent efficiency from the laser diode, said to be higher power and efficiency than previous guide star laser systems of its type.

According to the team, the real significance of the new finding could be that the technology can be further developed to increase the quality of future guide stars. Diamond can dissipate heat rapidly, and is less prone to unwanted optical distortions, providing a pathway towards producing more powerful guide star beams.

In addition it may be possible to deliver the laser power as a series of microsecond optical pulses, likely to be of benefit in adaptive optical systems, or scale up the diamond sodium laser concept to generate microsecond pulsed output with simultaneous high peak power and average power, to enable more point-like stars to be generated through adaptive optic systems.

"These applications need brighter guide stars with reduced star elongation and background noise, and these are aspects that our diamond laser approach looks like being able to address," said Xuezong Yang of Macquarie University.

"Our approach is also highly practical, because the intrinsic gain properties of the diamond element mean the laser is found to run on a single narrow frequency. This keeps our design simple, and the device potentially robust and low-cost."