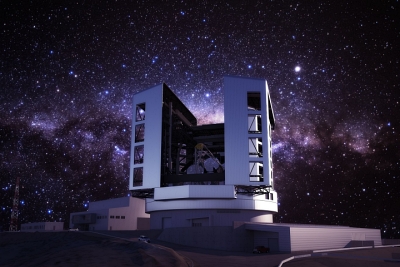 Developers of the critical optical systems that will feature inside the Giant Magellan Telescope (GMT) have received a boost, after the US National Science Foundation (NSF) awarded the project a $17.5 million grant.

Intended to accelerate prototyping and testing of some of the most powerful optical and infrared technologies ever engineered, the grant represents the first financial support for the project from the NSF.

Now slated for “first light” in 2029, the GMT’s optical design is based around seven 8.4 meter-diameter mirrors shaped like petals, yielding a primary optic with an effective diameter of 25 meters.

Along with the under-construction European Southern Observatory’s Extremely Large Telescope (ELT) and the Thirty Meter Telescope (TMT), it is one of three projects that will set a new standard for ground-based astronomy once completed.

Phasing test-beds for adaptive optics
According to the GMTO Corporation, which is responsible for managing the GMT project and operations, the grant will allow construction of two phasing test-beds for engineers to demonstrate that their core designs will align and phase the seven huge mirror segments with the requisite precision needed to achieve diffraction-limited imaging.

A full-scale prototype of the primary mirror support and control system to deliver active optical control is also part of the planned work.

The NSF support will also enable the partial build and testing of a next-generation adaptive secondary mirror (ASM), which will be used to perform the primary mirror phasing and atmospheric distortion correction. This work will be developed under a contract with AdOptica, an Italian consortium specializing in large deformable mirrors. 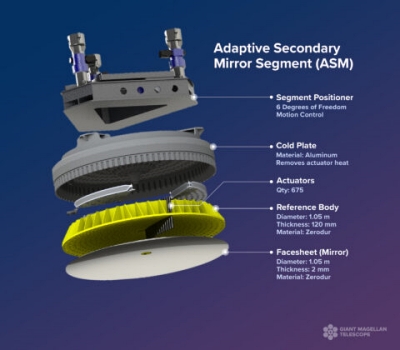 Unprecedented optical resolution
GMTO Corporation project manager James Fanson explained: “To achieve diffraction-limited imaging, we have to be able to phase these primary mirror segments so that they behave as a monolithic mirror. Once phased, we must then correct for Earth’s turbulent atmospheric distortion.”

“Our seven ASMs take this technology to the next step,” added Fanson, pointing out that up until the GMT’s design nobody has ever attempted to use seven such components.

“They are probably the most advanced tech we have on the telescope, and their success is a top priority. We need to test and validate their performance early on in the project.”

Once GMT is built, astronomers using the high-fidelity adaptive mirrors expect to be able to probe the universe in far more detail than is possible with today’s terrestrial and space telescopes. For example, GMT’s resolution is expected to be ten times better than that of the Hubble Space Telescope.

Among its primary scientific goals is to detect faint biosignatures from distant exoplanets - something that would indicate the likely presence of life throughout the universe.

The seven large mirrors that will eventually make up the primary reflector element are all at various stages of manufacture by experts at the Richard F. Caris Mirror Lab, part of the University of Arizona.

Cleaning TMT with carbon dioxide “snow”
• Technical experts at the TMT, which represents the second giant observatory within the US Extremely Large Telescope Program (US-ELTP), say that they have passed a major milestone with the cleaning system for the project’s primary mirror.

In contrast to the GMT, the TMT’s optical system is based around nearly 500 smaller (but still quite large) mirror segments.

According to a recent TMT announcement the cleaning system for the segmented primary mirror, as well as the secondary and tertiary elements, successfully passed its preliminary design review following a remote conference meeting last month.

The system uses liquid carbon dioxide gas, which will be pressurized and delivered to cleaning arms before expanding to generate carbon dioxide “snow” to drive dust from each optical surface. A similar system is already in use at the Subaru Telescope, at the Mauna Kea Observatory on Hawaii.

TMT’s backers are planning to build the new telescope at the same Mauna Kea location. However, the project has been delayed by arguments and legal action over the use of the site, which is regarded by some local people as sacred, and to have already been overdeveloped for astronomical purposes.