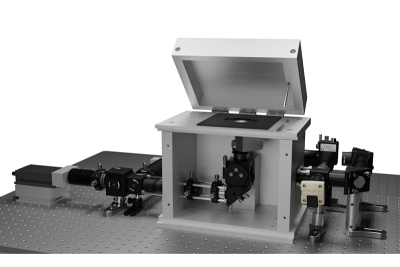 Scientists using the “Octopus” laser system at the UK’s Central Laser Facility (CLF) have published instructions for building a low-cost version of a super-resolution microscope capable of single-biomolecule imagery.

Known as the “smfBox”, the concept was originally developed in work at the user facility completed by a team from the University of Sheffield including undergraduate students.

Now, thanks to a combination of detailed build instructions and open-source software showing how other laboratories can construct their own systems, it is believed that the new approach could dramatically lower the cost of so-called single-molecule Förster Resonance Energy Transfer (smFRET) imaging.

“The design for the new instrument could see a wide range of laboratories using the imaging technique for new applications at a tenth of the cost of commercially-available equipment,” announced the UK Science and Technology Facilities Council (STFC), which runs the CLF. “The interdisciplinary team developed equipment at a cost of £40,000 that would usually cost around £400,000.”

Covid capability
Benji Bateman from the CLF Octopus team explained: “The smFRET microscope can be easily deployed as a powerful standalone diagnostic instrument or as a complementary technique to many other single-molecule studies.

“This will enable researchers to better understand molecular interactions and movements at the biomolecular level, driving advances in drug discovery and helping to tackle global challenges such [as] the HIV epidemic and the Covid-19 pandemic.”

Octopus group leader Professor Marisa Martin-Fernandez described the development as a “remarkable achievement”, and one that would give non-experts access to highly advanced imaging equipment.

In a Nature Communications paper detailing the approach, co-authored by Bateman, Martin-Fernandez, and Sheffield’s Tim Craggs, among others, the smfBox is described as a cost-effective confocal smFRET platform that should help drive much broader adoption of the smFRET technique by non-specialists.

“We wanted to democratize single-use molecule measurements to make this method available for many labs, not just a few labs throughout the world,” Craggs said in a release from the University of Sheffield. “This work takes what was a very expensive, specialist piece of kit, and gives every lab the blueprint and software to build it for themselves, at a fraction of the cost.

FRET photophysics
As Craggs and the team explain, FRET is a photophysical process that transfers excitation energy from a donor fluorophore to an acceptor chromophore molecule. The efficiency of that energy transfer scales precisely with the distance between the two molecules - meaning that the technique can effectively be used as a spectroscopic “ruler”, precise enough to yield spatial information at ranges below 10 nanometers.

“Despite the many advantages of smFRET, it is currently rarely used outside specialist labs, largely due to the high costs of commercial instruments and lack of self-build, easy to use alternatives,” write the CLF and Sheffield collaborators.

“To address this, here we provide detailed build instructions, parts lists, and open-source acquisition software, to enable a broad range of scientists to perform confocal smFRET experiments, on a validated, self-built, robust and economic instrument.”

Using lasers from Germany’s Omicron emitting at 515 nm and 638 nm coupled into a singlemode fiber and directed into a custom-built microscope body, they demonstrated the approach on a test system featuring DNA “hairpins”.

Other equipment to feature in the smfBox setup includes a large number of Thorlabs components, photodiodes from Excelitas, and optics from Edmund.

Light-tight design
The DNA hairpins are biomolecules that can be switched between two different structural states according to the concentration of a salt solution, and in a blind multi-center trial the smfBox is said to have yielded data in “excellent agreement” with other laboratories using commercial and home-built microscopes.

“While the microscope we describe is built for ALEX [alternating laser excitation] confocal smFRET, its modular design makes for easy expansion to several related techniques,” added the team.

Adding that, when assembled, the smfBox is sufficiently light-tight to allow safe and effective operation under ambient light conditions as a Class I laser product, lead author Craggs and his co-workers concluded:

“We anticipate that our low-cost, open-source approach will ease the adoption of smFRET by the wider scientific community.”