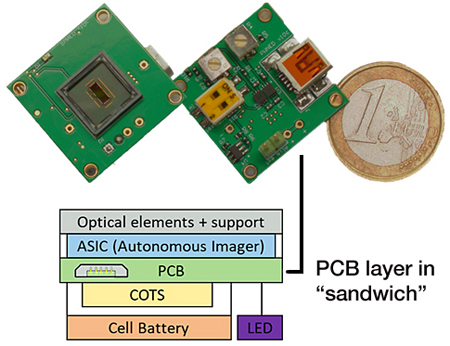 CEA-Leti’s autonomous imager for smart phones and other smart devices.

France-based research agency CEA-Leti has announced what it describes as “the world's first autonomous imager technology that activates smartphones and small appliances through face recognition or other specific patterns.”

Called µWAI (micro-WAY) and the same size as a €1 coin, the autonomous imager features a novel readout and processing architecture co-designed with an optimized algorithmic pipeline.

The recognition and recording of data starts with a sequence of elementary algorithms, making for ultralow-power wake-up modes. The design is based on a compact silicon format to keep costs down.

These key features also enable reliable decision-making for a few tens of pJ / pixel / frame, which outperforms conventional systems, say the developers. The pJ/pixel/frame measures the energy spent by each pixel for each single image within a frame of images. A typical [conventional] implementation requires about 10,000 times more energy than µWAI, says CEA Leti.

The autonomous imager is designed for everyday small appliances. Its key features include:

Applications and functions of the new sensor include automatic switching and face identification in mobile devices, contactless control of “smart” household appliances and sport-and-entertainment devices.

Antoine Dupret, CEA-Leti's industrial partnership manager, commented, “The µWAI’s recognition engine is optimized to recognize faces when movement is detected. CEA-Leti's team is working in partnership with STMicroelectronics to develop specific smart-imager products and we are considering extending the technology to other use cases. We target adapting the recognition engine as IP embedded in various cameras and optimizing the performance of the imager to the requirements of our partner's customers.”

The technology behind µWAI will be introduced during CEA-Leti's flagship digital event Leti Innovation Days, June 22 and 23, 2021.