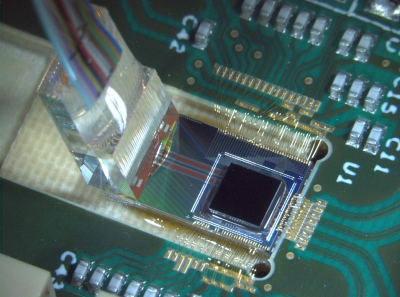 Members of a European consortium developing silicon photonics technology say they have demonstrated a fully packaged transceiver module with a data transfer rate of 100 Gb/s.

Led by CEA-Leti in France, the COSMICC (CmOs Solutions for Mid-board Integrated transceivers with breakthrough Connectivity at ultra-low Cost) project team believes that the new optical hardware will meet the communications industry’s demands for high-speed data modules - at a cost they say cannot be achieved with conventional approaches.

The COSMICC transceiver multiplexes two wavelengths at 50 Gb/s, and will be aimed initially at applications in data centers and supercomputers.

No cooling required
Following official completion of the €4 million Horizon 2020 project in late 2019, key breakthroughs were said to include the development of broadband and temperature-insensitive silicon nitride (SiN) multiplexing components on silicon, integration of hybrid III-V/silicon lasers on the silicon/SiN platform, and a new high-count adiabatic fiber-coupling technique via SiN and polymer waveguides.

According to CEA-Leti, the COSMICC team has in fact developed all the building blocks required to deliver faster transmission rates of 200 Gb/s and beyond, without any need for temperature control, by multiplexing four wavelengths and aggregating a large number of fibers.

“This demonstration opens the way to technology that allows a reduction in the cost, power consumption, and packaging complexity - and opens the way to reaching a very high aggregated data rate beyond terabits per second,” announced the research agency.

CEA-Leti scientist Ségolène Olivier, who coordinated the project, said that the critical breakthrough was the development of modulators and germanium photodetectors operating at 50 Gb/s, and their co-integration with control electronics.

“The new building blocks are essential for addressing the need for terabit-per-second transceivers at low cost and low energy consumption to sustain the exponential growth of data traffic in data centers and in high-performance computing systems,” she explained, suggesting that the technology would “answer tremendous market needs” with a target cost-per-bit that cannot be met with standard optical transceivers.

Scintil spin-out
According to the COSMICC project’s official summary report, although current optical transceivers based on VCSELs are able to meet cost demands, they suffer from limited speed and reach. On the other hand, modules with indium phosphide lasers are fast but expensive.

Aside from developing the two-channel 100 Gb/s transceiver module, the consortium created a new low-cost optical packaging scheme based on single-mode Si/SiN/polymer waveguide coupling that is able to combine up to 24 optical fibers, providing aggregate speeds in the terabit-per-second realm.

“The implemented adiabatic coupling scheme will enable a reduction of the energy per bit of 40 per cent at 50 Gb/s compared to the grating coupler scheme,” states the project summary, adding that the team has set up a pilot line for single-mode polymer packaging substrates.

CEA Leti says that the new approach consumes only 5.7 picojoules per bit for each channel operating at 50 Gb/s.

As well as the obvious utility in optical communications, the transceivers may help to usher in a host of new applications for silicon photonics. Those could include sensing and lidar, with the potential for use in future autonomous vehicles.