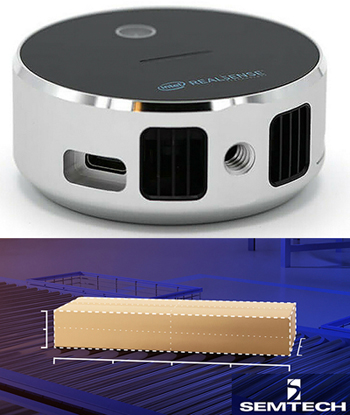 The partners’ announcement adds, “The collaboration between Intel RealSense technology and Semtech’s Signal Integrity Products Group has focused on enabling the L515 camera to work in low signal-to-noise ratio environments.

The TIAs feature low input referred noise, which allows the L515 to be a power-efficient, high-accuracy LiDAR system at a resolution of up to 23 million depth points per second.”

Gary Beauchamp, Executive Vice President and General Manager for Semtech’s Signal Integrity Products Group, commented, “We have been working with Intel on LiDAR for several years, and Semtech already has two generations of LiDAR chips in production. In addition, we are developing future chipsets together for deployment in this exciting market.”

The L515 leverages the Semtech TIA’s high bandwidth to deliver high-precision depth and less than 16mm error at the maximum operating range. Coupled with high frequency laser modulation, the L515 can sense objects as small as 7mm in diameter at a distance of one meter. 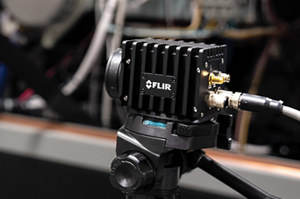 Teledyne Flir's new A50 and A70 camera format.

Thermal camera developer Teledyne Flir, which has been rebranded since the completion of the acquisition, announced earlier this week, says its newly-released A50 and A70 thermal cameras are designed for diverse applications from manufacturing to utilities to science.

Featuring a thermal resolution of 464 x 348 (A50) or 640 x 480 (A70), users can deploy the cameras in a variety of capacities. These include condition monitoring programs to maximize uptime and minimize cost through planned maintenance, or when used in early fire detection applications.