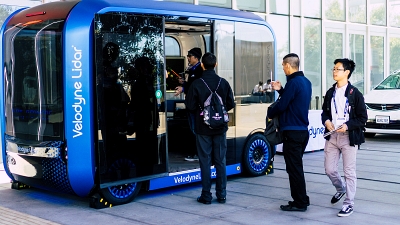 Two of the lidar companies that recently completed stock-market listings have reported significant losses in their latest quarterly results, as they wait for market demand to accelerate.

California-based Velodyne and Ouster are two of the six companies targeting automotive lidar applications to have used special-purpose acquisition company (SPAC) mergers to raise large sums of money on the US markets.

And despite the crowded market, venture backers have just poured another $64 million into Innovusion, with much of the cash being put towards increasing production of its automotive-grade lidar sensors.

Hardware sales fall
Velodyne, by a distance the longest-established of those firms, posted an operating loss of $41 million in the three months ending March 31, on sales of just under $18 million.

That sales total included a large jump in service and licensing revenues, with hardware sales falling 35 per cent year-on-year, to below $11 million.

Although the company sees a huge opportunity unfolding in autonomous driving and other light-sensing applications in the next five years, full-year revenues in 2021 are likely to drop for the second year in succession.

Velodyne CEO Anand Gopalan told an investor conference call that sales this year should end up somewhere between $77 million and $94 million. In 2019 the company posted a total of $101 million, dropping to $95 million last year.

Gopalan pointed to the lingering impact of the Covid-19 pandemic and the global shortage of electronic components - particularly in the automotive sector - as two factors that have put the brakes on growth right now.

“We believe that lidar will be the primary sensing modality for fully autonomous vehicles (AVs), and that Velodyne's technology will be front and center as AVs roll out in the coming years,” the CEO said, adding that he expected major companies to begin that roll-out over the next 3-5 years. 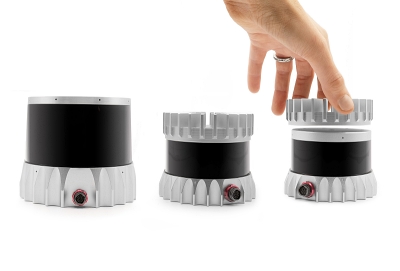 Ouster sees tipping point
Meanwhile Ouster, which raised $300 million through its recent SPAC deal, reported a sharp jump in sales to $6.6 million - though inevitably off a much smaller base than Velodyne. That still translated to an operating loss of $16 million, with CEO Angus Pacala saying that the firm shipped nearly 1000 sensors in the opening quarter of the year.

“We believe our momentum from signing 40 strategic customer agreements to date is a clear reflection of our strong competitive positioning,” Pacala added. “We believe we are reaching a tipping point in lidar adoption.”

Claiming that Ouster’s “digital” lidar offered both the best performance and the lowest cost in the industry, the CEO told investors that the total addressable market (TAM) across automotive, industrial, smart infrastructure and robotics applications of lidar would be worth nearly $9 billion by 2025.

He is expecting the company’s full-year sales to be in the region of $34 million - up from $19 million posted by the company in 2020.

“There's no other time in recent history - probably since the invention of the internet - that so many disparate industries have been affected simultaneously by a single trend like autonomy,” Pacala said, with lidar expected to be central to that disruption.

NIO partnership
The sheer scale of that TAM is still attracting venture capitalists to the potential of lidar, with Sunnyvale-based Innovusion the latest to announce significant new funding.

Led by Singapore-based Temasek, plus China’s BAI Capital and Joy Capital, the series B round comes a couple of years after the firm closed an initial $30 million allocation.

Unlike Velodyne and Ouster, Innovusion appears solely focused on automotive applications and the potential emerging from autonomous driving in particular.

NIO Capital is the venture wing of Shanghai-based electric maker NIO, which was established in 2014 - also supported by Temasek. NIO and Innovusion are already working together on the “ET7” vehicle, which will come equipped with an image-grade “ultra-long-range” lidar unit as part of a wider autonomous driving system when it launches in early 2022.

Innovusion claims that the system, based around 1550 nm laser emitters, will have a 120-degree horizontal viewing angle, ultra-high resolution, and a range of up to 500 meters.

Quoting figures from Yole Développement suggesting that the market for lidar used in autonomous driving will be worth $1.7 billion by 2025, Innovusion’s CEO and co-founder Junwei Bao added that he thinks the “vehicle-to-everything” market for smart transportation would also offer “huge” opportunities for lidar.