Luna confident as applications base grows 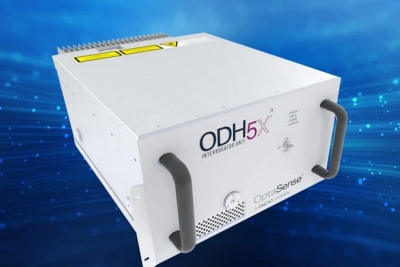 At $26.3 million, revenues in the three months ending March 31 were up more than 50 per cent on the same period last year - although the firm swung to a pre-tax loss of just under $1 million due to higher expenses associated with the acquisition.

Describing the company as being at an “inflection point of growth”, CEO Scott Graeff confirmed prior expectations that annual sales should end up in the region of $125 million, with profitability improving as the year unfolds.

“The addition of long-range distributed capability to our offerings establishes Luna as a new global market leader in fiber-optic sensing with diversified geographies and applications.”

Fracking sense
One example of the kind of applications OptaSense has penetrated is highlighted by a recent deal signed with fracking company Liberty Oilfield Services.

That partnership is set to introduce a new diagnostic service for oil and gas explorers called “FracSense”.

“It's important because it will allow our customers to optimize their hydrocarbon production, which, in turn, allows their operations to have less of an environmental impact,” Graeff claimed.

James Pollard, the managing director of OptaSense - originally a spin-out from the UK defense technologies developer Qinetiq and once short-listed for the prestigious MacRobert Award in engineering - added:

“The ability to optimize frac[k] design based on reservoir and production response will deliver considerable value. OptaSense’s fiber-optic measurements, delivering real-time data and visualization, along with Liberty’s hydraulic fracturing stimulation and completion design expertise, will help operators maximize resource recovery in their reservoirs.”

Optical communications networks represent another major market area for Luna, with CEO Graeff outlining how the company’s technology has made inroads into some specialist applications:

“Last year, we announced the introduction of our newest product, the OBR 6200, a field-portable version of our industry-leading optical backscatter reflectometer,” he reminded investors.

The system allows fast and accurate troubleshooting of fiber-optic networks in the field, and Luna agreed a partnership with defense contractor Lockheed Martin including an order for more than 100 units placed late last year.

“Our deliveries to Lockheed have proceeded without interruption throughout Q1, and we're happy to report that our efforts have been well received,” said Graeff. “These units are already being deployed in the field to help troubleshoot issues and keep the fleet of F-35 aircraft ready for service.”

Space lidar
A new growth area could be lidar, where Luna is involved in at least two projects with NASA. “We successfully designed, qualified and built a semiconductor laser to be used in the NASA navigation Doppler lidar system,” Graeff said.

“The selection of Luna's ‘RIO’ laser highlights our unique capabilities in the development and production of rugged, high-quality semiconductor lasers for emerging applications such as lidar.”

RIO stands for Redfern Integrated Optics - a company founded in Australia back in 2000, that developed a semiconductor laser specifically tailored for fiber-optic sensing applications.

The venture-backed firm was subsequently acquired by OptaSense, and so now falls under Luna’s expanding wing. Its products include a number of ultra-narrow-wavelength lasers based around planar lightwave circuit (PLC) designs.

Luna is involved in NASA’s Artemis mission, which is aiming to return humans to the lunar surface for the first time since the Apollo missions.

“We'll be delivering this month to Lockheed Martin's space [division] for use on the Orion spacecraft,” noted Graeff.

• Following the latest business update, Luna’s stock price fell in value by around 10 per cent on the Nasdaq but remains close to long-term highs.