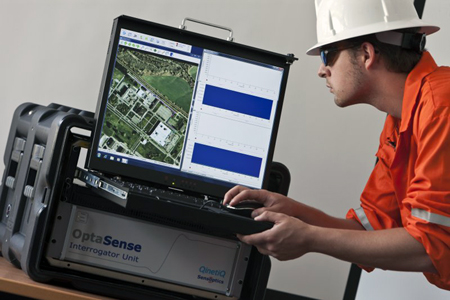 QinetiQ company OptaSense has signed a global commercialisation and framework agreement with oil giant Shell. The agreement sets out the basis on which Shell businesses can contract with OptaSense directly to use its Distributed Acoustic Sensing (DAS) system. The initial service to be provided under the agreement is a commercial hydraulic fracture monitoring service to keep an eye on oil pipelines.

The OptaSense DAS system provides a window on in-well processes and treatments. The hydraulic fracture monitoring service enables real-time monitoring of fracture fluid injection locations and provides an estimate of the volume of water and "proppant" uptake at these locations. A proppant is a material such as sand or similar, which is used to keep fissures in an oil-bed open.

With real-time monitoring of the operation at the treatment zone, operators can optimise the hydraulic fracturing process in a safe, reliable and repeatable way.

Commercial services between Optasense and Shell have now commenced in the United States and Canada with hydraulic fracture monitoring underway in "tight" sands and shale gas wells. These services are expected to be extended into new territories in the near future.

The hydraulic fracture monitoring services were developed in collaboration with Shell as part of the global research and development agreement announced in 2010.

OptaSense Managing Director, Magnus McEwen-King said, “This global agreement allows us to work with Shell around the world and is a positive step forward for our business as we look to expand both our international reach and commercial service offerings. It will also mean that we can continue to invest in jobs, having already created 100 new jobs in the past 12 months.”

OptaSense provides wells with their own nervous system enabling operators to react to events as and when they occur. The system can monitor that the propant fluid that is injected into the borehole gets to the right place, and if not, modify the process straight away. The company claims to be “world leader” in distributed fibre sensing and operating in 37 countries globally with operations across multiple industries including Oil & Gas, Defence & Security, Transport and Utilities. It is managed as an autonomous subsidiary of the QinetiQ Group.