Sale should allow Luna to invest more in its fiber-optic platforms for sensing and test and measurement applications. 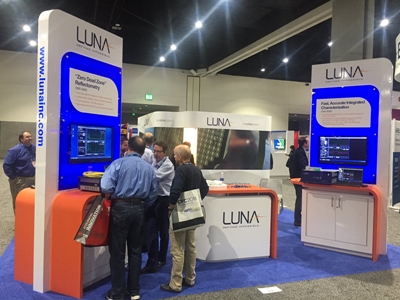 The $18.5 million deal, comprising $17.5 million in cash and a potential $1 million earn-out, is expected to see the affected Luna employees transfer to OSI. Luna says it plans to use proceeds to invest in its core fiber-optic based test and measurement platform, which is used in both sensing and communications applications.

Complementary addition
Nasdaq-listed Luna had originally acquired the business unit back in May 2015, when it merged with the optoelectronic component and advanced sensor maker Advanced Photonix, Inc (API). Prior to that merger, API had developed ground-breaking terahertz devices, and worked closely with US defense contractors on sensors for missile guidance.

OSI specializes in electronic systems and components for applications across security, healthcare, defense, and aerospace, and the former Luna division will be integrated within its existing OSI Optoelectronics business unit.

Regarded as one of the largest photodiode manufacturers in the world, OSI Optoelectronics says it has manufacturing facilities in the UK, US, Mexico, India, Malaysia, and Indonesia, with the facilities qualified to aerospace, medical, and automotive industry standards.

Manoocher Mansouri, president of the OSI Optoelectronics business, said in a joint release from the companies: “The addition of Luna’s Optoelectronic Solutions business is well aligned with our focus on expanding and enhancing our product portfolios. As a leader in this area, this acquisition is expected to be a complementary addition with its highly regarded, customized solutions.”

The wider OSI Optoelectronics division, created in 2006 through a consolidation of various older brands including UDT Sensors and Centro Vision, was bolstered in 2011 when OSI acquired LaserDiode from Tyco Industries.

Core focus
Luna’s CEO Scott Graeff, who announced the divisional sale on the same day as the company’s latest quarterly financial results, says that the deal will allow Luna to focus on its core business - fiber optic test and measurement – as well as boost the firm’s cash position for potential acquisitions in the metrology space.

“This divestiture is another important step in ensuring we have a robust and flexible balance sheet and a portfolio of complementary, scalable businesses,” he said.

According to Luna the sold division had delivered sales of $13.1 million in 2017, equivalent to around 30 per cent of the company’s total turnover.

In an investor presentation discussing the divestiture of the optoelectronics division and the latest quarterly results, Luna’s executives highlighted two “distinct growth opportunities” for the slimmed-down business in the communications sector.

Those include demand for advanced test solutions created by the emergence of silicon photonics, where Luna claims to offer device characterization services 30 times faster than competitor solutions.