OptaSense and Cobalt Light Systems up against Rolls-Royce for Royal Academy of Engineering's long-running innovation award.

UK-based photonics technology firms OptaSense and Cobalt Light Systems have been shortlisted for the Royal Academy of Engineering’s prestigious MacRobert Award, alongside the global giant Rolls-Royce.

As the UK's longest-running national prize for engineering, the MacRobert was set up to reward innovation allied with commercial promise and real-world benefits, with past winners including EMI Ltd's CT Scanner in 1972 and Cambridge Display Technologies’ light-emitting polymer displays in 2002.

This year’s winner is set to be announced at the RAE’s annual awards dinner, which will be held at London’s Royal Opera House on July 2.

As reported by optics.org back in 2011, Cobalt – a spin-off from the Rutherford-Appleton Laboratory (RAL) in Didcot, part of the UK’s Science and Technology Facilities Council (STFC) – has developed a Raman spectroscopy system that rapidly identifies substances by their molecular fingerprint.

Cobalt’s system can identify virtually any molecule sealed within a non-metallic container, without the need to open it, in just five seconds. It is based on an advanced Raman technique known as spatially-offset Raman spectroscopy (SORS). 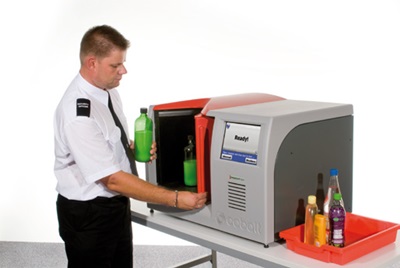 Airport security roll-out
With changes to the restrictions on liquids that can be carried onto flights in Europe coming into force, Cobalt has received a sudden surge in demand for its “Insight100” systems, which are now deployed in no fewer than 65 airports across the continent.

Through a phased implementation over the next few years, in concert with pending changes to EU regulations, it is expected enable passengers to start taking liquids on board aircraft as hand-luggage once again – a restriction that has existed since 2006 because of fears over the perceived threat from liquid explosives.

At the moment, passengers boarding planes in the EU are allowed to carry no more than 100 ml in capacity. The Insight100 system can analyze up to three liters of bottled liquid, deciding whether or not it is safe to carry on almost instantaneously thanks to the molecular specificity of the Raman technique.

And while other attempts to introduce more sophisticated screening techniques to airport security have been made, Cobalt says that the Insight100 has been a “game-changer”. The system has already been deployed in eight of the top ten EU airports, including Heathrow and Gatwick in the UK, with some 65 airports across the continent said to have introduced the system since the start of this year. Last November, Cobalt said that some 16 airports in Spain would use the systems, following similar agreements in France and The Netherlands.

Critical to the reliability of the system is a false alarm rate that is so low as to be negligible. That should help reduce airport delays, confiscations and the number of staff needed to manage airport security.

"Dramatic commercial success"
Beyond airport security, Cobalt is exploring other applications of the SORS technique, which has also shown potential for use in non-invasive screening for breast cancer, and food analysis. A related Raman system has also been used for quality screening by the pharmaceuticals industry.

SORS was first developed by RAL’s Pavel Matousek, before Cobalt was spun out of the lab back in 2008. Matousek is now the company's chief scientific officer.

Cobalt CEO Paul Loeffen said: "It is hugely satisfying to see an academic discovery from a UK laboratory undergo several stages of innovation ending with deployment at international airports to enhance passenger security. The development of the Insight100 has been a multi-disciplinary engineering effort on very tight timescales and has culminated in dramatic commercial success over the last year."