Researchers at KTH say they are "one step closer" by integrating quantum dots in silicon-based photonic chips. 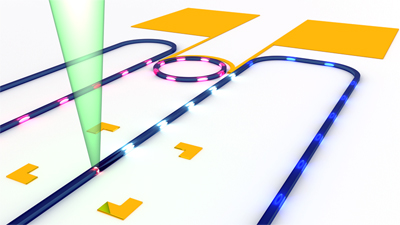 Integrated quantum circuit: photons emitted from a nanowire quantum dot are then filtered.

A Swedish research group focused on quantum nano photonics has developed a new method for enabling optical quantum information processing on a chip – which it describes as “a significant step forwards”.

The group, from KTH Royal Institute of Technology, Stockholm, has created what it calls the building blocks of such a system by integrating quantum dots in silicon-based photonic chips. They have generated and filtered single photons on-chip without the use of any external components. The work has just been published in Nature Communications.

Quantum computers and networks are expected to outperform today’s conventional electronics-based computers and networks, which encode information in binary bits. Quantum bits can simultaneously take a superposition of both values (“1” and “0”), which means that they can process significantly higher amounts of information with fewer calculation steps. Potential applications include more energy-efficient computation, sensing and secure communications.

However, there are challenges to overcome in order to be able to develop effective integrated quantum circuits. The Quantum Nano Photonics group at KTH solves these challenges, as shown in the work presented in Nature Communications, says KTH researcher Ali Elshaari, a co-author of the study.

”In the past, it has been extremely difficult to isolate quantum dots and to place them in a useful circuit, as they are randomly grown without having high control over their properties and their position in the circuit,” Elshaari commented. “Additionally, it is difficult to generate single photons on the same chip without using external filtering to remove all unwanted signals from the quantum emitters and background light.”

The research team used a novel nanomanipulation technique to transfer selected and pre-characterized single photon emitters in nanowires, on a silicon chip. The team then built an integrated optical circuit to filter single photons and multiplex them. The latter means using multiple quantum dots to generate light in various wavelengths, which can be used to encode different information on the same chip. 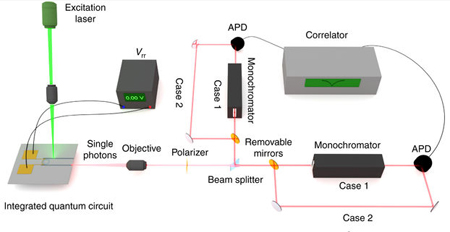 Elshaari added, “In order to achieve a functioning integrated quantum circuit, one must build its components deterministically. That means every component of the circuit is carefully designed and optimized to perform a specific task. There is no room for randomness or chance when it comes to the characteristics of the source or its location in the optical circuit, unlike previous approaches.”

One of the new achievements of the research team's work is that they have created a hybrid approach that combines two semiconductor technologies, III-V technology in the form of nanowire-based quantum emitters, and silicon technology in the form of the integrated optical circuit. He said, “Hybrid integration with nanowires has not been done before. The results are a very important step toward enabling quantum information processing on a chip.”

The Nature Communications paper concludes: “We have deterministically integrated quantum emitters on a CMOS-compatible platform with tunable ring resonator filters that show ultra-efficient pump rejection. This allowed us to demonstrate a reconfigurable 2-emitter WDM channel, which can be extended to include more quantum emitters and incorporate additional coding schemes.

”By eliminating the need for off-chip components and providing in-plane excitation scheme, our results open up new possibilities for large-scale quantum photonic systems with on-chip single- and entangled-photon sources. Our approach, providing efficient tunable filtering and routing of single photons, allows for the integration of complex architectures and will enable experiments far beyond two particles.

”We believe that this approach, using nanowires, which offer high degree of growth control, is the most promising integration technique. Especially, since crystal phase QDs in nanowires are emerging as a highly designable system at the atomic layer level. This brings us an important step closer to realize the ambitious schemes of (linear) optical quantum computing that have been put forward over the past decades."