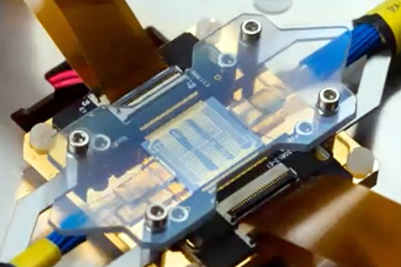 QuiX, a photonics spinoff company of the University of Twente, The Netherlands, has announced the first sale of its quantum photonic processor. The customer is Qontrol, based in Bristol, UK, a photonics research company.

Quantum photonic processors are the core of a quantum computer that works with light. In future, says, Quix, quantum computers will be used for data processing, “especially in problems that conventional super computers cannot deal with anymore”.

A quantum computer can be built using “qubits”, which operate at very low temperatures. Light, with photons as quantum bits, is an alternative: such a processor uses the quantum properties of photons and may even operate at room temperature.

QuiX, which was founded by the photonics research groups of the University of Twente together with the existing LioniX spinoff company, is currently developing processors for quantum processing and simulation.

Transparent for all light sources

By using the LioniX technology platform TriPleX, QuiX can now build large-scale and fully reconfigurable photonic processors with low losses. These are transparent for all available light sources. In December, 2020, QuiX announced a quantumphotonic processor of “record size”, with 12 inputs and 12 outputs.

Qontrol develops control electronics and infrastructures for complex, massive, multichannel photonic integrated circuits. These PICs are used in telecom, but also in fundamental research. Qontrol’s components are already deployed in many research labs all over the world.

Jelmer Renema, CTO of QuiX and researcher at UT’s Centre for Quantum Nanotechnology Twente (QUANT), commented, “It is great news for QuiX, as Qontrol is one of the leading companies in quantum photonics in Europe.”

“Using this chip in our labs, we can now better understand and guide our clients. It will be a fantastic tool for demonstrating what our own components are capable of. Thanks to the possibility of using visible light, I expect that great live demos will be possible,” Silverstone added.