Headwall Photonics technology one of eight technologies that will be evaluated for detecting opioids in mail packages. 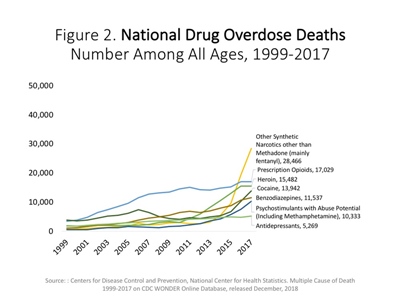 Hyperspectral imaging technology developed by Massachusetts-based Headwall Photonics has been short-listed for the US Department of Homeland Security’s (DHS’s) “Opioid Detection Challenge”.

Aimed at non-invasive detection of opioids in packages without disrupting the flow of mail, the technique is one of eight finalists - selected from 83 submissions - in the $1.55 million competition that will now proceed to the prototyping stage.

Opioid crisis
The technology challenge is one of the responses from the US government in a bid to address a public health crisis in the country that saw nearly 50,000 people die from opioid overdoses in 2017. Deaths attributed to the potent opioid fentanyl are responsible for a huge recent increase in fatal overdoses.

Figures from the US National Institute on Drug Abuse show that total deaths from overdoses in the US jumped from around 17,000 in 1999 to more than 70,000 in 2017 – roughly doubling every decade. Fentanyl is seen as particularly dangerous because only a tiny amount is needed to overdose, with musician Prince among those thought to have died accidentally after taking the drug.

“International mail has been identified as a route for illicit opioids entering the US, commonly transported in nearly pure, powdered form,” explains the DHS. “Consequently, large-scale drug trafficking can occur via small packages sent in the mail.”

As a result, the DHS and US Customs and Border Protection are looking for automated, user-friendly technologies that might be suitable for inspecting large numbers of packages without disrupting or opening mail.

Headwall’s CEO David Bannon said in a company announcement: “Our hyperspectral sensors offer a powerful combination of machine vision sensing, real-time processing capability, and a ruggedized design that already benefits thousands of customers around the world with instruments on the process line, on farms, in the air, and even in space.

“Helping to reduce the human cost of addiction by automated interdiction has great social impact and means a great deal to us and our community.”

On-site testing
The Battelle/Headwall system now moves on to a 14-week accelerator stage, during which a deployable prototype will be developed. Other technologies to have made the short-list include a variety of X-ray, ultrasound, and high-frequency radio wave methodologies.

Once the prototypes have been built, they will be deployed across international mail and express consignment facilities, and similar environments across the US.

The testing stage culminates in a mandatory live event, with the finalists set to convene at a government-selected facility for on-site testing of their prototypes.

This fall the judging panel, which comprises several senior personnel from the likes of the US Postal Inspection Service and US Customs and Border Protection, will select a winner and runner-up sharing a prize pool worth $750,000.